Fought mostly in the year 1860, The ''Paiute War'' involved The Native American Paiute Tribe (which had confederated itself along with The Shoshone and Bannock Tribes), went to War against American Settlers who had encrouched upon their Territory in Northern Utah (and later what would become The Territory of Nevada). Initially, hardships began with The US Government and The Paiutes when The ''Pony Express'' extended it's route through their Territory. After many ''running gunfights'' and deaths – Chiefs of The Tribe tried unsuccessfully to enter into a Treaty to move the route. Finally, after much delays – one was entered into with The Tribe in early 1860.

Only several months of Treaty was ever known. Silver was discovered in what would become Nevada Territory. This brought wave after wave of Miners and Prospectors – violating The Treaty. Despite War being the end result, some Settlers tried to help The Tribe during the freezing Winter. Their Hunting sources exhausted (or pouched upon by Whites, no doubt) – much food was sent in relief. The Paiute refused it, fearing it a trick by poison.

After the Winter thaw, several well known Settlers and Business Owners in some of the small ''Silver Towns'' that had sprung up – had been found massacred. It was no doubt a Paiute Raid. War was declared. A Militia of 100 The Men formed to ''deal with'' The Paiute (who had allied themselves with several other Tribes with similar disdain for The Settlers) – would first encounter the largely undisciplined Militia at The Battle of Pyramid Lake (near The California/Nevada Border). Mostly drunken, The Militia was ambushed. (70) of their number were killed. Later, Militia was again formed , only under US Army control. Artillery was attached and proper command was placed. In addition, Cavalry was deployed. Together, close to 1,000 Officers and Men were formed.

Although several moderate skirmishes were fought between The Native Americans and US Militia, it was once again (as fate would have it), that both sides would meet again at Pyramid Lake. This time, thew battle was not an Indian victory. More disciplined and using controlled fire, The Militia inflicted heavy casualties (which were not verified, as The Paiute carried off their dead). This was the final engagement of The Paiute War. The Tribe would eventually be segregated to The Federal Reservation, clearing the way for continued Silver Mining and the last final years of The ''Pony Express''. 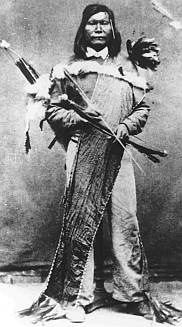