The ''Paddle Frigate'', modified into an ''Iron Ship'', ''Nemesis'' was built at The Birkenhead Iron Works in 1839. She was part of The British East India Fleet (''Indiaman''), and was listed as a ''Covert'' Vessel. This was applied to this such Vessels who performed ''clandestine'' Missions for The Company, often non-flagged, which was a violation of Maritime Law. This was for the purpose of monitoring and if needed, to serve as a Raider against The Chinese and the impending ''Opium Crisis'' (which would eventually lead to two Wars).

When The First Opium War began in 1840, ''Nemesis'' was already working off The Coast of China. Her modified Iron applied Plating and superior firepower was brought to bear against Chinese Raiders running Opium for Foreign Ports. So effective, The Chinese named Her ''The Devil Ship''.

She was heavily armed with (2) Pivoting 32-pound Cannon and (4) 6-pound Cannon. The ''Nemesis'; also supported (4) ''Congreve'' Rocket Batteries. Her Iron Plating was rated between 1 to 2.5-inches.

Winning almost all Her engagements with Chinese Warships (actually previously purchase East Indiamen themselves), after The First Opium War, She was Posted to Company concerns between Indonesia and The Philippine Islands until the 1850s. She was sent ''home'' to Belfast, Ireland in 1854. A ''harbored'' Ship until the 1880s, she was eventually broken up. 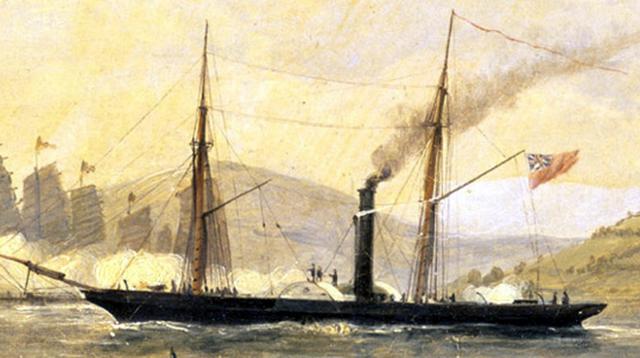