It is easy for a casual reviewer of History to wonder just how many Civil War Battles were actually fought (this includes the many hundreds if not thousands of ''engagements'', ''encounters'' and ''skirmishes''). Much confusion arises in the names given to battles and their locations. Both The North and The South often named their encounters differently (with a few limited exceptions).

The practice arose out of the regional ''habit'' of identifying locations by their geographical placements or landmarks. This was especially true in The American South. Rivers, Lakes, Mountains, etc. were often cited as proper landmark locations. Hence, when Southern Armies fought, they would identify their ''battles'' by the nearest natural landmark.

In The Northern Armies, the opposite generally held true. The nearest Village, Town or City was often cited as proper place names for their engagements. Rarely did they use natural geographical markers (although sometimes they were forced to out of necessity).

On a few occasions, both sites used the same naming process. An example would be The Battle of Gettysburg (Pennsylvania). Whereas The Town of Gettysburg was in fact the ''largest'' landmark for hundreds of miles, The South was more and less unfamiliar with the geography of the area (for them it was an invasion). They too chose the Town name.

The following is a brief example of the different and often confusing naming used by both sides:

Battle of:
The North: Manasas Junction (a Railhead)
The South Bull Run (a River running through The Region).

Battle of:
The North Sharpsburg (a Town)
The South Antietam (a large Creek running through The Region)

Battle of:
The North Olustee (a Town)
The South Ocean Pond (a nearby freshwater Lake)

Battle of:
The North Murfreesboro (A Town)
The South Stone's River (nearby River)

As one can imagine – the above naming process, if duplicated for several hundred engagements, would given one the impression that there was many more battles fought than actually were. Often Northern maps were likewise printed to show City and Town points, with greater emphasis placed on natural landmarks in The South. 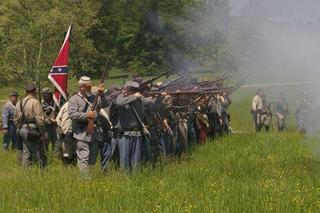