The Rebellion occurred from May to July of 1685, and was caused by the claim of James Scott, 1st Duke of Monmouth to The Throne of England, then held by James II. Scott was the illegitimate Son of former English King Charles II. With Charles death in 1685, the Throne passed to elder Brother James. Scott took cause, citing his bloodline (despite it's denial under centuries of English Law). Harkening back to the previous century and the many fears of a Catholic Monarch on England's Throne (of which James II was a devout Catholic), Scott began to form an army of supportive Nobles (in monies at least), and Commoners, The Duke raised 4,000 effectives. Declaring James II inviolate, The Duke took control of Southwest England.

To counter, James II sent a Force of 3,000 Loyalists with the intention of stopping Monmouth before he could move on to The City of London. The Rebels fought (and won) a series of small skirmishes (with mostly small Forces. This was no contest to the coming Battle of Sedgemoor. The bulk of The King's Army (trained professionals), camped for the night at Sedgemoor (near Somerset). The untrained Duke's Army moved for a rare night assault, only to find The Loyalist Forces well deployed and ready. Forming Volley Lines quickly, The Loyalist make quick work of the charging 500 Cavalrymen and 1,500 Infantry. Casualties were in the hundred.

Those survivors were tried and executed, to include The Duke – captured several days later after The Battle. He was convicted of Treason and beheaded in London in 1685. 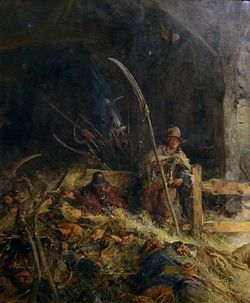