Commissioned by The Royal Scottish Navy in 1505 and completed in 1512, The “Michael” was Carrack-classification of warship. She was 240 feet long with a 40 foot beam. Large enough to accommodate close to 1,500 Crew and Transport Troops, “Michael” was considered one of the “Great Ships” of her day. Built to hold 56 cannon of various poundage, she was even said to have had the “Monster Gun” Mons Meg in her armament at one time (one of the largest cannon of her day). Named after The Archangel St. Michael, her first mission was against The Ottoman Empire during The Palestine Crusades. This mission was scuttled with The War With England (Scotland was allied with France) – known as The Italian Wars. Being so large, The “Michael” was constantly in Ports for repairs. Seeing more “Port Time” than battle, she was eventually sold to The French (after The Battle of Flodden). History takes a turn for The “Michael” here. Some Historians feel she was re-named and may have been one of the ships responsible for The French victory at Solent (1545). Some say she simply rotted away at a berth in Brent. Her true fate is unknown. 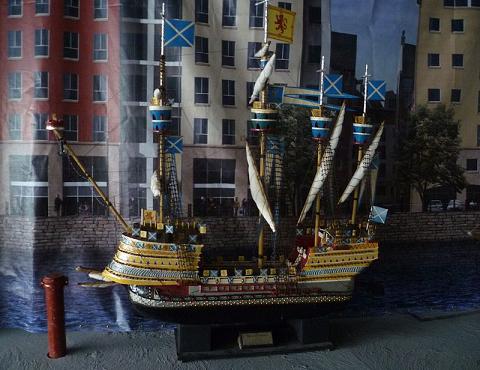