The “Meduse” was a French Pallase-Class Frigate, buit,in 1808 an launched in 1810. She displaced over 1,000 tons and was 154 feet long. She stood 40 feet (beam). Wind powered, she featured some 1,950 yards of canvas (sail). She carried 40 guns various poundage (her largest was a Carronade of 36-pounders). She crewed over 300 Officers and men. She participated in the waning days of The Napoleonic Wars. After the re-establishment of The Bourbon Restoration, The “Meduse” was dispatched in 1816 to carry French Officials to Senegal. Inept Command and piloting led to “Meduse” hitting a deep bank off of Mauritania, she sank.

This is where the “true story” of The “Meduse” begins. Sinking quickly, a large makeshift raft was constructed. The plan was to have the ship launches tow the raft to a nearby island. As a storm was developing, the launch boat crews panicked and cut the raft with 146 persons free to drift. The launch crews were able to make Africa (and Senegal). Some died along the way. The raft fared far worse. No water was put on the raft (only wine) and very little food. Fights broke out. By morning, 20 were dead. Some had committed suicide. The storm set in tossing the ramshackle raft in the sea. In a rush to get to the center of the raft, many were washed overboard. By the 4th day, only 67 persons remained. They resorted to cannibalism. This continued until the 8th day – when only the strongest still surviving began to throw over the weakest and dying.

By day 12, the raft had been spotted by The “Argus”. Within 5 more days, 5 more of the survivors died of exposure and exhaustion. A British Frigate found a few survivors still alive after 54 days, still clinging to the partially submerged wreck of The “Medusa”. They were rescued. A Court of Inquiry was eventually held (the Captain was one of the survivors in the launch boat). The matter was often thought covered up by The French Government (who suppressed much of the testimony of the few survivors). The Captain was allowed to resign his commission. The “Medusa”s Captain was a political appointment (which was a common practice in The French Navy at the time). The wreck and tribulations of The “Medusa” caused The French Navy to overhaul it's promotion system to one based on training, experience and merit. The incident was made famous by the 1818 painting, “The Raft of The Meduse”, by Theodore Gericault. Her wreckage was re-discovered in 1980. Her artifacts are displayed at The Marine Museum in Paris France. 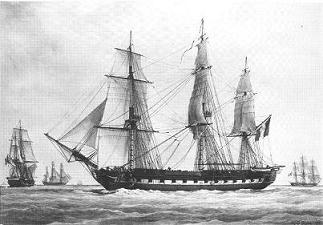