Launched in 1851, The “Marco Polo”, saw a varied and rich career. Built in New Brunswick, Canada – The “Marco Polo” served no less than 3 Countries. She was 200 tons displace, and 185 feet long. She stood 40 feet tall (beam). She was a wind powered vessel that was never converted to steam. Sold to England in 1854, The “Marco Polo” was part of The Black Ball Line of Australian based Merchant ships (specifically used to transport timber from Australian to England). In 1856, she was converted over to a Passenger Ship (to cash in on the lucrative emigrant passage trade of Colonists from England to Australia. It took “Marco Polo” 76-days to make the journey (3 weeks in Port for repairs and refitting) and another 76 days to return.

She is responsible for hundred (if not thousands) of emigrant transport between the two Countries. To minimize wear on her hull, “Marco Polo” was refitted with a copper hull sheath and was ”known” for her bright yellow riveting bolts. With Colonist traffic waning by 1871, she was converted into a coal and timber transport. “Marco Polo” was finally sold to Norway in 1887. She continued to serve as a cargo ship between the Main Canadian Coat and Prince Edwatds Island. Sadly, “Marco Polo” sprang a leak (and as luck would have it, her bilge pumps failed). The crew were able to beach her instead of allowing her to sink. Most of the ships Masts and Main Deck were cut away. Over the following 6 months, the winds of The North Atlantic did the rest. 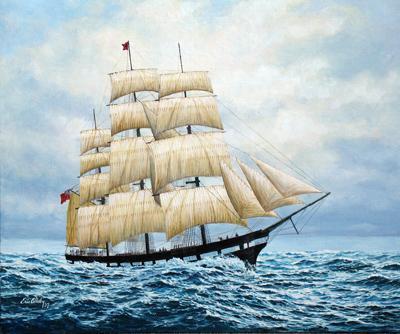