The name “Long Tom” is actually more of an identifier than Gun classification. A “Long Tom” denoted and large Caliber Cannon that featured an unusually long Barrel or Tube. Classifications of these types of Artillery (and the nickname), extends to both Sea and Land Batteries or individual Cannon.

The first usage of the term “Long Tom” derived in the early 19th Century, “Tom” has so many possible connotations that it’s actual origins are too obscure. Privateers seemed to favor the longer barrels as a way of both increasing distance and the ability to aim more effectively, when a Vessel was “pitching” (moving up and down in the waves).

On land, “Long Toms” were seen to a small degree in The American Civil War as a Mountain Gun. Placed high on a Summit, it could be used to target advancing Troops.  A “Long Tom” was instrumental  during The Southern Confederacy’s attempt to deny The Cumberland Mountains from Northern Control. During The Anglo-Boer Wars in South Africa, The Boer made extensive usage of “Long Toms” against The British. Examples would continue into World War I and early World War II.

Normally, the lowest Shell type used with The “Long Tom” (especially for Naval usage), was 18-Pounds. Land versions favored 32 to 64-Pound Shells. Often, Columbiads, Dahlgrens, James, Armstrong and of course Parrott Guns are placed into the category of “Long Toms”. A distinguishing factor to separate them from a regular Field Piece or Howitzer, was their much higher elevated Cassion. Typically, a “Long Tom” also had a farther range. Thus was evidenced on both Sea and Land. Anywhere from 4,000 to 9,000-Meters was acceptable for a “Long Tom”.

In both World Wars, “Long Toms” were identified with 155mm Artillery. However by The Korean and Vietnamese Wars, the term “Long Tom” had all but vanished. 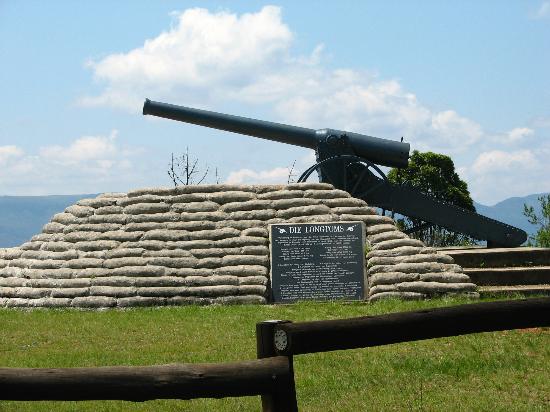