This Ancient Greek Warship was said to have been the largest ship ever built during The Hellenistic Period. Although nothing of her exists, several mentions of her are mentioned by the Greek Historian Memnon. Considered a “Supership””, Leontophoros was around 300 feet long and made of lacquered wood. She may have been over 2,000 tons displaced. The ships featured an Iron front Ramming Prong, said to have been 55 feet long. The ship could hold a crew of 1,000 (according to reports). She was Oar (Human) Powered. She also featured 8 Defensive Turrets on her deck that could easily carry multiple Polylobos Missile Artillery. Leontophoros was said to be able to carry an entire “Army”. It was said she was eventually lost in a storm. 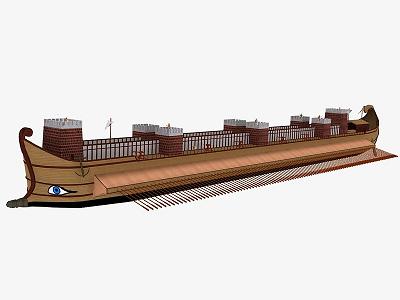