The Lance Rest was a metal flange plate, which was attached to the right side of the Breastplate. Developed in the 14th Century, they would remain a primary component until armor was deemed impractical. The plate slightly conclaved (allowing the rear of a Lance to sit firmly in place and stable when riding or at the gallop). This allowed control also during an attack thrust. It's positioning allowed the rider to assume a low, crouched position when at the charge. The Lance Rest was either bolted or hinged for attachment. It was designed to be folded out of the way when not in use (or when the wearer was on foot). 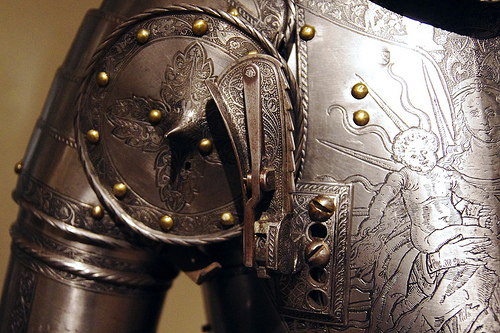