This Swedish ship was at one time considered one of the biggest ships built in The World. “Kronan” was the Flagship of The Swedish Navy in the 1670s. Considered a “Ship of The Line”, she was displaced at 2,300 tons. “Kronan” was 217 feet long and sat some 44 feet tall (beam). Capable of holding up to 800 Officers, Crewmen and transport troops - “Kronan” held 110 cannon of different poundage. She was slated to hold 126 cannon total (although that re-armament plan never came to be). Built in Stockholm, Sweden – she was launched in 1668. “Kronan”s largest guns were 8 36-pound Naval pieces. She featured 3 Gun Decks and the innovative Stern and Forcastle Gun Lofts (which held 20 6-pounder guns). “Kronan” featured all the latest in Naval ship building technology (as well as weapons armament).

The ships were elaborately painted and decorated (as was the custom) – which conveyed her “Royal status”. In design, “Kronan” was very similar to the ill-fated “Vasa”. It is speculated that some 25 acres of forest were milled to build her massive hulk. Launched in time for The Scanian War (part of The Northern War Period) – 1675-79, she was initially unsuccessful in her “Commerce War” (taking no prizes). Sent to recover besieged (and freezing Swedish land forces), she was unable to get through the ice floes (thus contributing even more to the military disaster). In 1676, during The Battle of Oland, “Kronan” was part of the Swedish Attack Fleet. It has been speculated (mush as “The Vasa”), that poor seamanship, untested renovations and a severe gale wind – all contributed in “Kronan” listing to one side and sinking rapidly. The vast majority of the crew was lost. In 1971 (and again in 1980), her wreck was discovered. Her remains have yielded many artifacts from The Era. 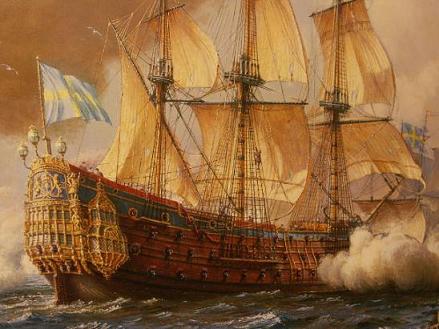