The loyalty that a Vassal owed to his Lord was formalized into a ceremony known as “Homage”. As per the custom, the Vassal would kneel in front of his Lord (normally in a Chapel of Cathedral). The affair was attended by many other high-ranking Nobles as well. The Vassal would place his hands into the hands of The Lord (in cases holding Holy Relics). He would pledge his loyalty. In return, The Lord was expected to grant certain benefits as a result. Land or a specific Right could be given. The Lord would then “kiss” his Vassal on the cheek (or checks). By later centuries (12th Centuries), kissing on the hand (normally by the Vassal) was the accepted protocol. 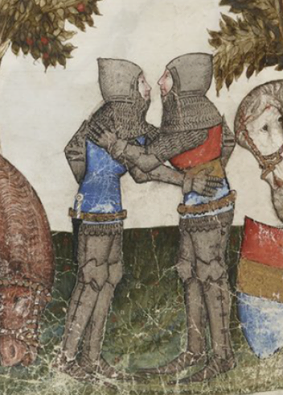