The German built Carrack “Jesus of Lubeck”, was commissioned by England’s King Henry VIII for his growing Fleet of Warships, in 1540. It saw it’s first combat against The French in 1545. She was used to recover cannon from his “Super Ship” The “Mary Rose” (which sank also in 1545). Damaged later that same year, The "Jesus of Lubeck” was dry docked and later repaired during the Reign of England’s Queen Elizabeth I. She was turned into a Merchant Vessel. In 1563, she became a Slaver, operating The Atlantic Slave Trade. Sunk by a Spanish Fleet off of San Juan in 1568, she was 700-tons displaced she stood 30-feet tall. A Triple Decker, The “Jesus of Lubeck” mounted 45-cannon and crewed 150 when she was Classed a Warship. 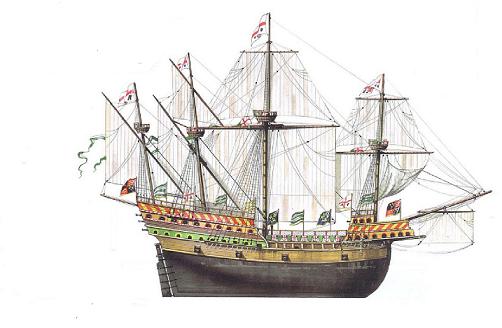