Named for the Owner of The famed “Black Ball” Shipping Line, The “James Baines” was one of the most luxurious and largest Clipper ships built in the mid 19th Century. Displacing close to 3,000 tons, she was almost 230-feet long with a 50-foot beam (height). Capable of carrying up to 700 passengers and Cargo, “James Baines” was equipped with the unique “Moon Sail”. The squared sail (flown over the Top Sail), increased speed by 25 percent. She carried 100 Officers and crewmen. The “James Baines” made the Liverpool, England to Melbourne , Australia “run” - in a record 69 days!. Constructed in 1853, she had a regal career until an accidental fire swept through the ship in 1858 while in Port at Melbourne. The ship burned completely down to her water line. She was declared a loss and her Hull was broken up and sold for scrap. It was said the real James Baines never fully recovered from the loss of his “self-named” Flagship. 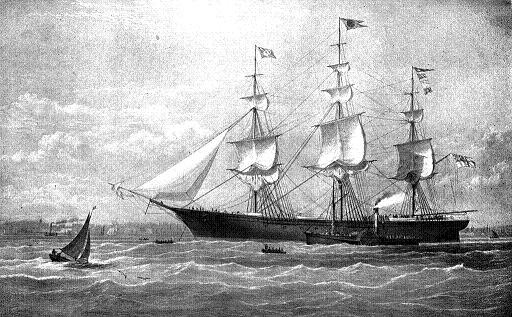