The geographical area identified by American Forces during The Vietnam War of 1966 to 1975, known as The “Iron Triangle”, was a 120-square mile Region in The Binh Durong Province of Central Vietnam. A “stronghold” of North Vietnamese, Viet Cong and their sympathizers since The French Indo-Chinese War of the 1950s, The “Triangle” was a major source for material storage, shipment and intelligence gathering for Communist Forces.

Bordered in The West by The Saigon River, The East with The Ting River and The North with The Capital of South Vietnam , Saigon. The far South of the Triangle was Binh Durong. The Triangle was actually a complex series of underground Tunnel Systems that stretched for hundreds of miles. The most famous of which was The Chu Chi Tunnels. Despite repeated Bombing Raids and “Search and Destroy” Operations, The Chu Chi Tunnels and The Triangle were highly effective from 1967 to 1969.

Despite reprisals against local populace within The Triangle by South Vietnamese and American  Forces, it is estimated between 5,000 and 12,000 infiltrators operated out of The Region. Well protected by a myriad of Improvised Explosive Devices and “Booby Traps”, Operations were considered highly dangerous.

The Triangle would serve as the staging ground for attacks against The South Vietnamese Capital of Saigon on a consistent basis. It would remain a viral part of establishing a Communist Political “footprint” in a captured South Vietnam from 1975 onward. 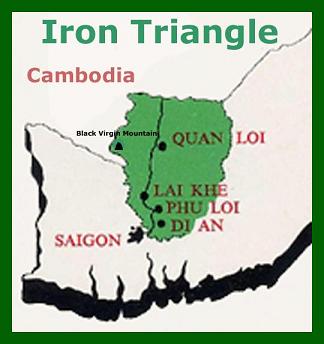