The ''Hounds'' Gang was an organized criminal organization that operated in and around The City of San Francisco (California). With the discovery of vast Gold Mines in the North, thousands upon thousands of not only Americans, but person from all over The World – flocked to California, all hoping to make their fortunes. The Gang was seen by some as the ''enforcement Arm'' of The Political Party known as The Nativists (who wished to rid The US of all foreigners). Armed with assistance from this (and other like) Parties, The ''Hounds'' concentrated their attacks against Chinese and Europeans alike. Often, ''terror tactics'' were but a warning, as The Gang's primary ''tool'' was murder.

Well organized, even local City Law Enforcement could not stop them. Soon The Gang decided to form a policy of demanding ''protection money'' from City Residents. They at one point literally controlled The City of San Francisco. However, by 1851, enough Residents had risen to stop them. A Vigilante Committee was formed to bring The ''Hounds'' to justice (at 250 armed Vigilantes newspapers claimed). Many were captured and tried, but most were released (with these numbers leaving The City or face hanging). Some did remain, by without any ''muscle'' (support), most of The ''Hounds'' Leadership left The State. 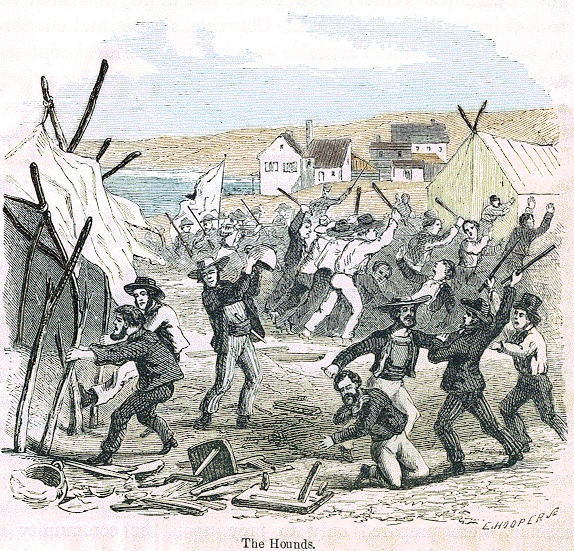