Considered The “Titanic” of The Air, The German manufactured “Hindenburg” was considered the largest Airship (Zeppelin) ever built. It was the Lead Ship of a proposed “Hindenburg”-Class of Passenger Airships built by The Zeppelin Company for The German Zeppelin Airline Company. Designated as LZ-129, construction commenced in 1930-31. By way of History, The Oceanic Passenger Trade had long reached it’s heyday. Luxury Liners were extravagances, more so with the firm evolution of The Airplane. With the first Transatlantic Flight successfully undertaken in 1927, developers and designers from all over The World began to envision a practical conveyance. While “large” Air Passenger craft were still in their infancy with regards to a money making and practical development, another form did exist. That was The Airship.

Practical used of lighter than air vehicles had been speculated since the 15th Century, with a first successful attempt in 1789. Experiments would lead to the use of various gases which would be more effective at lift and air buoyancy that the use of heated air devices (the common method of making a lighter than air Craft lift). The basic design of these types of Airships were made a reality by Ferdinand Von Zeppelin in 1874 and made a reality in 1895.

Named for the recently deceased German President Paul Von Hindenburg, The “Hindenburg” began operations in 1936, transporting passengers and Mail from Europe (German) to The United States. The massive Ship was a formed metal framed skeleton made of Duralumin, measuring 803-feet long. The overall design pattern was comparable to an Amusement Park Ferris Wheel. There were 15 such “Wheels” which composed of “Hindenburg” internal “ribs”. Her “skin” was composed of a Cotton material coated with reflective paint, designed to minimize atmospheric radiation (which could damage the Hydrogen Cells).

The Airships diameter was 135-feet and had an overall mass (volume) of over 7 Million-feet.  “Hindenburg” could staff a Crew of 60 and could safety transport around 70 passengers. She consisted of (2) primary Decks which were richly appointed.

Her buoyancy was accomplished not by the traditional Helium Gas, by Hydrogen. Considered not as safe (flammable), it filled the 16 massive Gas Cells (Cotton bladders) faster and maintained a superior lift. All told, “Hindenburg” could achieve an Operational Ceiling of 5,000-feet with a “lower end” height of 3,000-feet. Stability was greatly increased due to the use of the more dangerous gas. Hydrogen however,  was also cheaper to use (which meant maintaining higher profits). “Hindenburg” used 4 Daimler Benz DB602 Diesel Engines, which gave it a maximum airspeed of 85-mph.

With the rise of The German Nazi Party, officials sought to capitalize on the sheer size and power of “Hindenburg”, drafting her into service over Berlin for the 1936 Olympic Games. During it’s first full year of operation, “Hindenburg” made 17 Transatlantic Flights between Europe and America, and transported well over 2,800 passengers. She held the record for crossing at 5 days, 19-hours.

Leaving Frankfurt, Germany for Lakehurst, New Jersey (US) – “Hindenburg’s” final flight began on May 3, 1937. Making her final approach over The Naval Air Station on May 6, 1937 (7:21pm) – the unthinkable happened. Just 650-feet above the ground, a tremendous explosion ripped the sky. The hydrogen bags ignited causing a cascading fire storm that engulfed the entirety of “The Hindenburg’s” massive frame. Within 1.5-minutes, she had crashed into the ground, a twisted and burning wreck of metal. Of the 97 passengers and Crew, amazingly – only 35 perished.

The cause of the explosion had to date never been truly explained. Germany immediately claimed sabotage and pointed it’s fingers at “Foreign” instigators, jealous of German technology and advances. Others, claim that a freak encounter with atmospheric static electricity – which may have ignited the volatile hydrogen gas cells. The real reason will never be known. Despite this, Germany fielded another “Hindenburg”-Class of Airship The “Graf Zeppelin”. Plans for a “Graf Zeppelin II” were unrealized due to the suspension and closure of Airship building and design (due to Germany diverting all efforts towards a pending War Effort).

Much of “Hindenburg” and her surviving wreckage was gathered up and shipped back to Germany, with very few pieces having survived to today’s time. Much of her steel was smelted and would be reused to construct some of Germany’s Luftwaffe Fighters. A small Memorial to The Crash (which also became one of the first “filmed” disasters as it occurred), still exists at Lakehurst NAS. 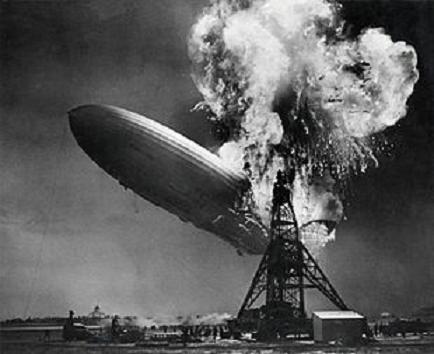