At one time, The British Carrack “Henry Grace A’Dieu”, was the largest Warship afloat in Europe. Built in 1512, she was launched in 1514. Seen as a counter to Scotland’s The "Michael”, The “Henry” was named for King Henry VIII. The massive Ship was England’s first Twin or Double Decker built. She displaced 1,500-tons and was 16 5-feet long. She stood 85-feet tall. Crewing 700 to 800 Men, The “Henry” was armed with 43-Bronze Cannon and 141-Swivel Guns. She was also the first Ship to include Gunports. As such, The “Henry” was the first to implement The “Broadside” tactic. The “Henry” was a 4 Mast configuration which used both Square and Lantern Rigged patterns. However, it was soon clear that The “Henry” was to top heavy. Consequently, in 1536  - She was retrofitted to remove some 500-tons.

The “Henry” participated in The Italian Wars at The Battle of The Solent (1545). Her other claim to History, was that The “Henry” transported King Henry VIII to The French Court of Francis I in France. This Summit between the two Rulers was known as the infamous “Field of Cloth and Gold” (for the extravagant spectacle both Rulers staged to impress the other). The Royal Naval Tradition of showing The Ensign when passing a Coastal Town, also started aboard The “Henry”. Renamed The “Edward VI” in honor of his Coronation as King of England, The “Henry” met an uncertain end. Although unclear as to the facts of her demise, most Historians chain She caught fire off Woolwich, London, England. A complete loss, her Hull was left near The River Thames to rot in 1553. 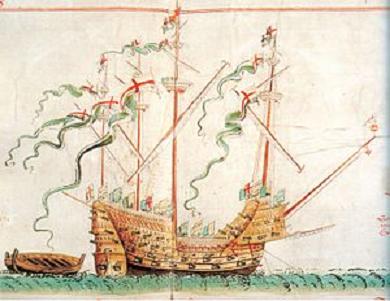