Translated to mean “Half Moon”, this early Exploration Ship was a Dutch “Vile Boot” (similar to a Period Carrack). Commissioned by The City of Amsterdam for exploration of The “New World” (America), construction began around 1607 – with her launching in 1608. The “Halve Maen” was roughly 85-feet long and 17-feet tall (Beam). Constructed entirety of wood, she sported over 2,000-yards of Sail. The City of Amsterdam commissioned English Explorer Henry Hudson to lead an Expedition. Gathering a Crew, he set sail in early 1608. After a perilous journey across The Atlantic, he arrived in what would become New York Harbor. Hudson sailed The “Halve Maen” into a nearby River Tributary, due to her very shallow draught  (around 19-feet). His Explorations of this River, went as far North as what would become Albany. The River still bears just name, The Hudson.

Returning to The Dutch Republic with his findings, thus information inspired The Dutch to colonize the Region discovered. They would later establish “New Amsterdam”. The fate of The “Halve Maen” had her docked in England around 1615. She was destroyed by The British in the short lived Jakara War. However, several full sized replicas had been commissioned over the 20th Century to commemorate Hudson and his journey. Several were destroyed by accidental fire, but one version still exists as a Museum Ship. Completed in 1989, she was docked in Albany, New York  (the end of Hudson’s journey). She is currently docked in Amsterdam, Holland as of 2015. 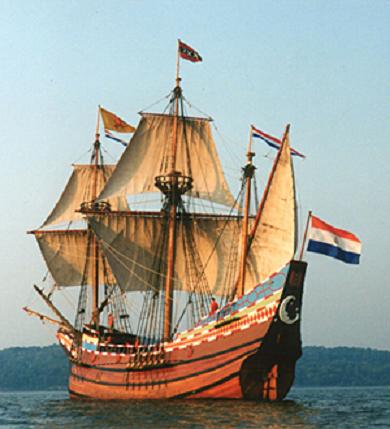