The Gunfight at The OK Coral

Seldom has one Event in American Western History, propelled an Enthusiast into the experience of an “honest to goodness” Gunfight, as that of The Gunfight at The OK Corral. The Incident, which lasted only a scant 30-seconds, still reverberates in Americana, even today. The “legend” as well has shrouded the “facts” of that infamous day.

BACKGROUND:
The “Town” of Tombstone, Arizona Territory was erected as one if the last Arizona Settlements, before The Mexican Border. It was a minor Cattle way-station, well on it’s way to “Ghost Town” status, had Silver not been discovered nearby. As a result, more Settlers and “Hopefuls”, eager fur a “rich strike”, relocated to the backwater Town. Almost doubling it’s size overnight, there was even talk of The Railroad adding a Spur of Track .The Town hired a County Sheriff and City Constable  (whereas Tombstone was considered the County Seat). The Town also attracted it’s fair share of Gamblers, Prostitutes and “Saddle Tramps”. It also attracted the notorious Cochise County Cowboys, a cut-throat Gang. They held sway over Tombstone, partially supported by a crooked County Sheriff (John Beehan). The City Constable, Frederick White, although meaning well was simply too old to resist much.

NEW RESIDENTS, NEW GRUDGES:
It was into this, a new group of Settlers arrived. In fact, word of the most famous of them preceded his arrival. Recently retired Sheriff Wyatt Earp, his Brothers Morgan and Virgil and their Wives (Wyatt had a long time Girlfriend, Mattie Blaylock) – decided to start “anew” in Tombstone. Their goal was to purchase space and a Gambling concern in a local Saloon (perhaps even buying one). Wyatt quickly accomplished this  (even taking possession of a small Silver Mine from a Gambling debt). The Earps drew far away from anything related to Law Enforcement. Wyatt had become famous in Dodge City, Kansas (as had his Brother Virgil). The Mayor of Tombstone pleaded with Earp to take over as Town Constable. Wyatt wanted no parts. That was soon to change. Ike Clanton was a Gambler (and not a good one). Getting drink one night, he caused a “ruckus” in Wyatt’s Saloon. Fists flew and Wyatt had Ike arrested. Ike wanted revenge.
Soon, another incident occurred. Constable White was “accidently” shot trying to arrest a drunk “Curly Bill” Brochius. The Earps took him and several other Cowboys into custody (as concerned Citizens). Bill beat the Charge, but the animosity between The Cowboys and The Earps was near full boil.

A FRIEND ARRIVES:
John “Doc” Holiday, an ex-Georgia Dentist, turned Gunfighter and Gambler, was a “close” friend of Wyatt. Arriving in Tombstone to “try his luck”, he too became embroiled in the Earp Drama. The death of Constable White put Virgil to mind to take the job as Peace Officer. He deputized his Brother Morgan. Wyatt “consulted”, but still wanted no part. When his Brothers enacted a “No Guns in Town” Ordnance  (which they used in Dodge City), Ike and Bill Brochius had had enough. The Earps had to go.

THE GUNFIGHT:
The OK Corral was a small, open-air Horse Stables at ten far end of Town. Ike Clanton, Tom and Frank McLaury as well as William Clanton (Ike’s younger Brother) and Billy Claiborne into Town “heavily armed”. Rumor spread that they were “gunning” for vengeance against The Earps. Morgan swore in Wyatt and Holiday as “Special Constables”. Likewise armed, they headed out down the Main Street of Town towards The Corral. The Town knew was to happen. It was 3 PM on the 26th of October, 1881. Exactly what transpired is still debated. No real witnesses saw what transpired and most of what is known, came from Wyatt and Virgil. The Earps confronted Ike and his Men. Invoking The Gun Ordnance, The Earps ordered them to surrender their weapons, after which they would be placed under arrest. The least they would have suffered was a might in Jail and a Fine . Who really shot first will never be known. But for 30-seconds, all “Hell” broke loose as Pistol and Shotgun cracked and popped. 30-seconds – exactly.

THE AFTERMATH:
Ike Clanton, in true form – ran away “like the Coward” he was as did Claiborne). The McLaury Brothers and Billy Clanton were killed. Morgan received a “flesh wound” with Virgil reviewing a rather severe gunshot wound to his leg (he would walk with a limp for the rest of his life). Wyatt and Holiday were unscathed. A Trial was held, with Clanton hiring an Attorney that argued The Earps were the aggressors. In the end, as Peace Officers – they were well within their rights to defend themselves. Clanton was incensed. He vowed revenge. Later, an “unknown” Assassin would shoot Morgan in the back, killing him. Virgil almost met the same fate, but a quick turn of his body in the dark, spared him a direct blast from a Shotgun. He would nonetheless lose the use of his Right Arm. Wyatt had enough. Using his connections, he was Deputized as a Federal Territorial Marshal. Recruiting 6 “trusted friends” (including “Doc” Holiday), Earp formed the infamous, “Vendetta Ride” against The Cochise Cowboys. Brochius, Ringo, almost 30 Gang Members were hunted down and killed. Only Ike Clanton and his “luck” escaped. He would be shot in a Saloon – dead, a year later (1889).

CONCLUSION:
The Town of Tombstone became forever immortalized as a result of The Gunfight. In fact, they capitalized on it. Preserving The Coral as a “Shrine”, thousands came to visit the site of the fight. The Coral burned down, and was later paved over, but “mannequins” now stand in for The Earps and Clanton Gang. Still, amidst the at times “Carnival” and Tourist atmosphere, one can still image those “30-seconds”, which was The Gunfight at The OK Corral. 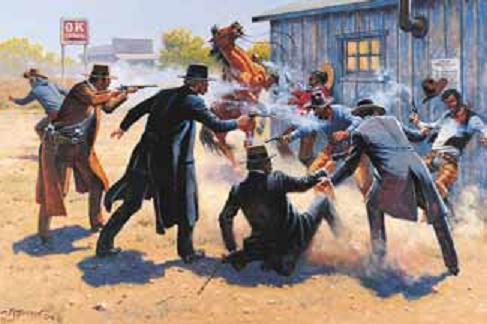