Immortalized by Hollywood Film and a staple of The Western “Dime Novels” of the late 19th and early 20th Century, the “truth” of The Gunfight has been lost in Myth and Legend. The “Legend”, paints the following picture. Two Men square of on a deserted stretch of City Street. Perhaps 5 yards or more. Feet squared, their hands extended a foot from their Gun *slung low in a worn leather Belt and Holster”. A a point known only to the two, they draw their Revolvers, lighting fast. The loud report of the two short echo…. One falls dead. In reality, this is not how a “typical” Gun Battle was fought. There were only two such “documented” such cases of Gun Battles fought thus way, and both accounts are somewhat “sketchy”, at best. A Gun Fight was often quick, brutal and unplanned.

Perhaps an argument over a lost Card Game, the unrequited “affections” of a Saloon Girl or simply a “test “ of Reputation. Insult or injury notwithstanding, a Fight seldom happened with such grand Theatrics. Even on cases in which a Town Peace Officer was involved, in most cases, they laid in wait – with Rifles. One warning was all the Offender got. Non-compliance was met with a “shower of lead”. A Gun Fight was normally engaged in distances of mere feet. Often, 2 to 4 feet, was considered in range. And to he sure, if alcohol was involved – even at that range, Opponents often missed. It would not be uncommon for them to drunkenly reload and commence firing all over again.

And it was not always Pistols. Often Knives (even Hatchets were used). Handguns were Single Shot Cap and Ball or Double Action. Most often, as we have seen with The Gunfighters, more than one weapon was used. The cause of the romanticized Western Gunfight was created by the Contemporary “Dime Novels” (so named for the cost of the mini-book, 10 Cents). These were along to England’s “Penny Dreadfuls”. Writers often either completely made up the Tale or had heard it Third Person. Such Novels often created Gunfights. Shootists would be challenged based on what was read (not actually accomplished). Still perceived incorrectly even today, The Western Gunfight still represents an iconic piece of Western Americana. 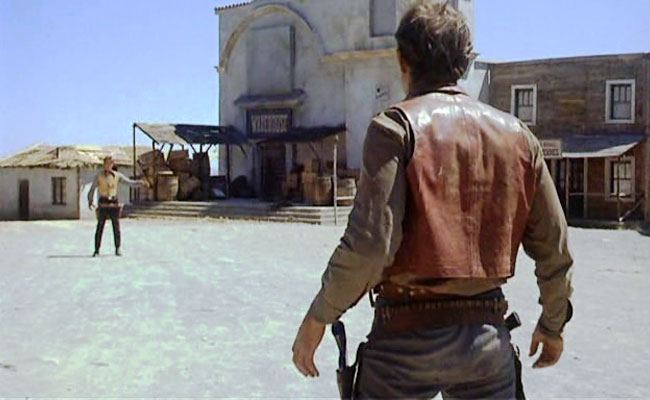