The “Great Republic” was an American Clipper Ship, considered one of the largest types ever built. Built in 1852 (and launched a year later), the ship cost the huge Period sum of $450,000 USD (an unheard of sum for a non-warship). The “Great Republic” had a massive displaced weight of over 4,500 tons. She was a 3-Masted ship with full sail and rigging components. She was 400 feet long with almost a 300 foot Main Mast. She featured 3 Decks (with each Deck having an 8 foot clearance). She was said to sport some 50 sails (when fully deployed at sea). “Great Republic” carried 60 crewmen (but was designed to carry 120).

On her initial “Maiden voyage”, she sailed from Nova Scotia to Liverpool, England in just 13 days. During The Crimean War, “Great Republic” was chartered by The French to move munitions and troops for their war effort. She retired in 1869 and was sold to an English Commerce Company and renamed The “Denmark”. Badly damaged in a hurricane off of Bermuda in 1872, she was left adrift and sank. She set many records during her heyday, including navigating Cape Horn at 31 miles per hour and logging an impressive 413 nautical miles in just one day. 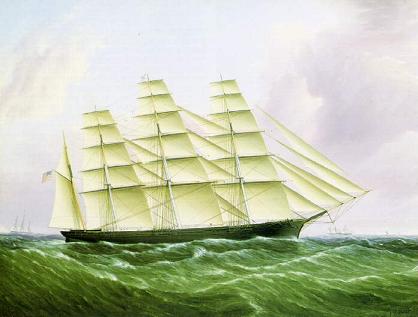