The Great Palace of Constantinople

The once Center of Imperial Eastern (Byzantine) Imperial Power and positioned within The Capital City of Constantinople, The ''Great Palace'' served as ''home'' to The Byzantine Emperors from the 2rd Century AD to 1081 AD (690 years). Located between The Hippodrome Stadium and The Hagia Sophia (Basilica), The Great Palace suffered from The Nika Class Riots of the 5th Century (but was rebuilt). The impressive Marble and Gold structure and it's many out buildings by the 11th Century had again fallen into disrepair with The emperors using the nearby Palace of Blachernae as official Royal Residence. Plundered again during The 4th Crusade of the 13th Century AD, The Palace would be retaken by Byzantine Forces. By this time the once Regal Palace which featured a Staff of 400, and noted for it's Royal Library and Art, was all but vacant and a shell of it's former self.

Even when taken a final time by The Ottomans, Sultan Mehmed II noted that the ''sad'' structure should have been saved. Unfortunately, all of The Great Palace still standing components and debris was used in rebuilding Constantinople (now Istanbul). A very few columns and portions (facade bricks) are still visible on various buildings and structures, today. 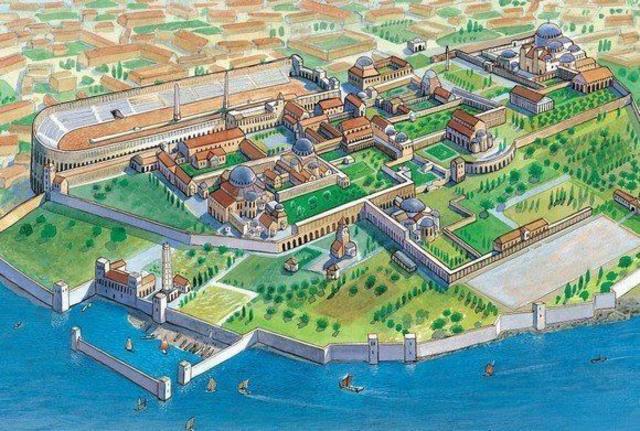