The ''Grand Armee'' (or ''Great Army'') was the primary Military body of France, under Napoleon Bonaparte. It existed between 1804 to 1809 (in it's original form). A much smaller and less effective Army existed between 1810 to 1815, and was also known as ''The Grand Armee''. The original Formation consisted of between 640,000 and quite possibly 1.5 Million effectives. The Army was the largest single Force in Europe that was well trained, equipped and paid. Consisting of (3) Branch Components (Infantry, Artillery and Cavalry). Each of these had smaller sub-Forces (Light Infantry, Specialized Infantry, Light Artillery, Light Cavalry etc.)

Although seen as a French Service, in reality – only close to 100,000 of it's Ranks were French. Most of The Army was foreign. Formed from Nations occupied, annexed or Allied to Napoleon, they came together and fought quite well. Although only French Generals (Marshals) commanded primary Forces, much of the lesser Formations were commanded by any capable Officer. The Grand Army also abolished many Military conventions and traditions regarding promotions to higher Ranks – even Commissioned Officers. It was said that even a lowly Private could rise to Command a Division by deeds and actions (unlike any other European Army at the time).

The Grand Army's real strength was in it's supply and control. However, as The Army grew, it's supply system did not. This would become even more telling in 1809 and The Russian Campaign, in which Napoleon unwisely attempted to invade Russia during it's infamous Winter Season. Stretched beyond normal resupply, food and medical needs – coupled with unrelenting attacks by Russian Irregular Forces (Cossacks), The Grand Army would be practically destroyed as a result. Of the nearly 750,000 men of all Ranks and Branches, only a scant 150,000 would return. Never quite it's original form, the later ''Grand Army'' of 1810 was far less ordered. Depleted of it's long serving veterans, suffering from corrupt supply administration and political appointees, by Napoleon's final scheme to ''draw a line'' in Belgium at Waterloo (1815), The Grand Army, while launching a valiant attempt, would be crushed by Coalition Forces. It would not be formed again. 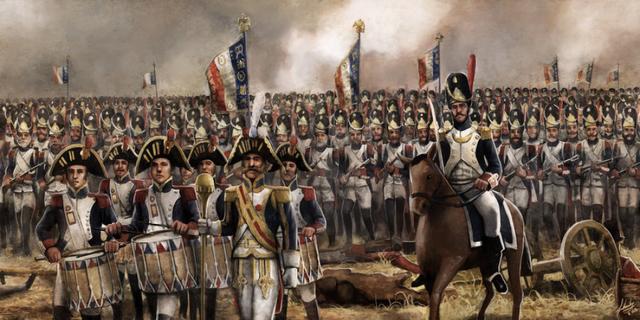