Iconic in it's appearance,  the Military marching step nicknamed "The Goose Step" is closely associated with Nazi Germany and World War II. However, the Martial step is actually many Centuries older. First seen in a form in Ancient Rome - it was known as "The Bossa Romana", or "Roman Step". Used by The Legions of Rome, it was akin to the "Long Step" or "Hop Step" of today. It was seen as a psychological warfare method  (thundering stomps of massive Formations of soldiers as they moved). The romanticized "Goose" moniker attached to the step was used to emulate the Avian Goose  (and it's stiff legged "waddle").  Long out of use, German and Prussian Militaries revised it in the 18th Century. Seen as a Quick Step, it is the exaggerated swinging if the legs in alternating unison. One leg is straight while the other is slightly bent. This position causes the Marcher to compensate for the "loss" of balance by leaning forward. This momentum and the subsequent repeat of steps with the opposite leg, creates the "Goose Step" effect when marching. The term "Goose" was coined in two different ages. First described by English soldiers who use a modified such step (18th and 19th Centuries). Additionally, Americans used the term as derisive of The German March (1930s-40s). The step is still used by many Military's  of The World, even today. 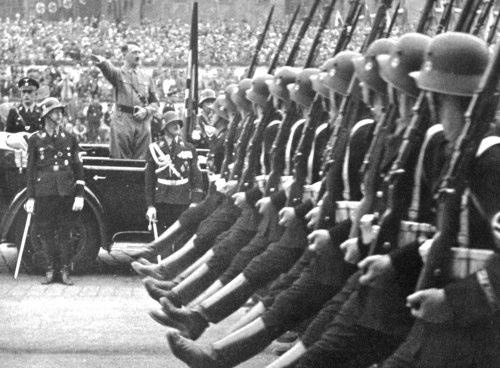