With the establishment of The Republic of Texas (born from The Texas War of Independence of 1835-1836), The City of Galveston created a ''Coastal Guard'' Regiment in response to an illegal Invasion by Mexico in 1842. Fearing a Naval assault, The Guard was formed to protect The City.

Mustered in at 100 Officers and Men, the Galveston Guard (aka The ''Sea Fensibles'') were noted for their ''uniform'' Woolen Red Hunting Shirts and Buckskin Trousers. All wore ''stout'' Wide Brimmed Hats and wear somewhat ''heavily armed'' with Musket, Pistol, Knife Tomahawk and Pike''.

Transported into The Harbor of Galveston with 50 ''Texas Fusiliers'' by small boat craft, The Force boarded a Steamer and patrolled The Texas Coast – seeking The Mexican Naval Invasion Force. It was determined that after 3 days, the so-called Invasion was but propaganda, and The Force returned to Galveston.

The Galveston Guard would endure as a Home Militia for several years until disbanded. Most would join The US Army when The Mexican-American War would start in the late 1840s. 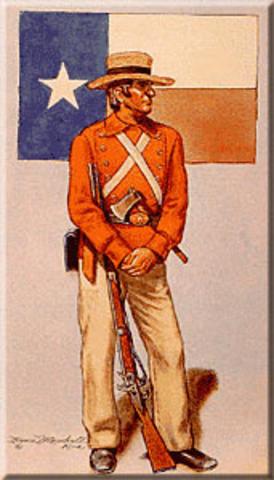