Dating to the 3rd Century AD, The ''Four Tetrarchs'' is located in Mt. Mark's Basilica (Venice, Italy). The statute set depicts The Emperors Constantine, Augustus Maximian, Caesar Chlorus and Diocletian. The work is unique in that it combines both Eastern and Western Emperors, each ''supporting'' a portion of ''The Church'' (alluding to a pre-Schism ideology). It is thought that The Tetrarchs were placed in The Royal Palace at Constaninople (and later into a Public Square known as The Philadelpion) also in The City) and removed to Venice in 1204 AD. Seen as an advancement in ''Symbolism'' Art as opposed to ''Realism and Idealism'' Art pieces, which would begin to emerge in The early Middle Ages. When Constantinople was sacked by The Ottoman Allies The Venetians, during The Fourth Crusades (1204 AD), the captured Tetrarchs were take to St. Mark's (1207 AD). It has remained since. 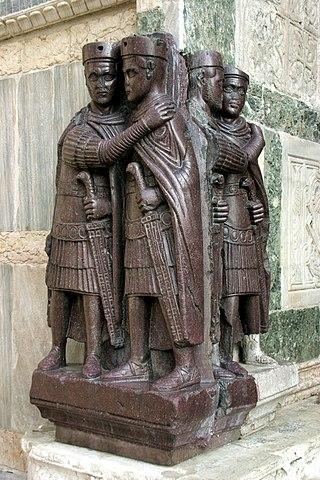