The Fortress Of Carcassonne

The fortified City of Carcassonne, is a Medieval citadel located in Aude, Languedoc-Roussillon, France. Developed on the Aude River, it was originally a Gallo-Roman City. Having been controlled by The Romans, Visigoths, Saracens and Crusaders - Carcassonne had a colorful past. When under Roman control, the first initial walls around the City were constructed (3rd Century). The Bellnoid Dynasty (formed during the time of Charlemagne), also developed in Carcassonne. In The 5th Century under Visigoth control, they successfully held off repeated attacks from the Frankish King Clovis.

In the 7th Century, this time under King Pepin The Short - Carcassonne was taken by The Saracen. After a short (but bloody) siege, Pepin was able to retake the City. Carcassonne became French Territory in 1247. It served as a stronghold buffer between France and Aragon. Carcassonne quickly became a center for the regional textile (wool) industry. Famous for it's role during The Albigensian Crusades, it served as a stronghold for The Occitan Branch of The Cathars. In August of 1209, a Papal Army attacked, executed or expelled all Cathars. A massive defensive perimeter wall system encircles the castle and city (stretching some 26 miles). These walls were an immense undertaking - one that took many years to complete.

Some 53 defensive Towers dot the walls. Just about every form of Medieval defense system was incorporated into Carcassonne. Access to the castle Keep was via a Drawbridge defense system. Always under renovations, Carcassonne also was the first fortress of it's kind to use Hoardings. These were wooden ramparts constructed against the walls. Opening were placed at the top and bottom. Soldiers could hurl rocks and other material safety down on the heads of their attackers. The 13th Century saw Carcassonne as a regional headquarters of The Inquisition. A Great Tower was constructed for their use. It is speculated Carcassonne may have been able to garrison some 3,000 men. There are many historical locations within the castle and city that are open to the Public. 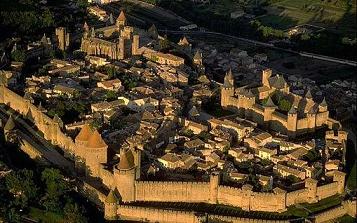