While most have heard of The Battle of The Little Big Horn, Montana in 1876 – in which US Army  Officer Lt.-Colonel George Custer and 256 Members of The 7th US Cavalry were annihilated by Sioux Warriors, few are familiar with an engagement known as The “Fetterman Fight”. The more aptly additional name of “Massacre” is best put, due to not only the total loss of The Command, but it’s grisly aftermath. It occurred some 10 years prior to it’s more “legendary” predecessor, which gave it the first “honor” of being the worst ever engagement suffered by The US Army up to that point, at the hands of a Native Force.

BACKGROUND:
With the end of The American Civil War in 1865, The US Army could return it’s attentions to The Native American  “problem”. The War recalled much of The Army back East and slowed Westward Expansion to a crawl. Now with hostilities over, many Americans wished to leave the War ravaged East and South and head West for a new start. Naturally, The Native American to exception. While most Tribes had berm more or less subdued and little ingredients in Reservations, The Northern Plains and Southwest Tribes were still active and aggressive. A failed Treaty of Ft. Laramie in 1851, in which The Federal Government promised Sovereignty to The Plains Tribes, was largely ignored. Angering The Tribal Chiefs, most especially Chief Red Cloud of The Lakota Sioux. Refusing to negotiate a move to The Reservation, he declared War. Aided by The Cheyenne, Crow and Kiowa, his War began in 1866.

"BOAST AND BRAG":
The US Army set about repairing and building Frontier Fortifications to protect Settlers and Travelers. Much of their Outpost system had be destroyed by Native Americans during The Civil War. With much of it’s Forces depleted, few Veterans remained. Those that did remain in The Army, had never fought an Enemy like The Indian. Seen as “savages”, these were some of the finest Light Cavalrymen in the World. This opinion was not shared with Army Captain William Fetterman, who looked upon the Indian with disdain. A capable Army Officer, he wad Brevetted a Lt..-Colonel during The late War. He was young, and had “Stars in his eyes”. His Commanding Officer, Colonel Henry Carrington, had plenty of experience with The Native American. When Fetterman made his boast that with but “80-Men, he could conquer The Sioux”, was answered with prudence. But Fetterman was not alone in his belief.  Complaining to Area Commanding General Philip Cooke of Carrington’s “lack of action”, he authorized a Patrol  and a Mission. The Mission was simple. Take a combined Command of Infantry with Cavalry Escort in Sioux Territory and establish an Outpost. Fetterman had his Command.

THE BATTLE:
Roughly 76-Men (from The 18th Infantry and 2nd Cavalry), left Ft. Kearny, on December 20, 1866. They moved deep into Sioux Territory, unopposed (but not unwatched). Over 1,000 combined Sioux and Cheyenne Warriors “shadowed” The Fetterman Command. The Soldiers passed over a steep elevated plateau of ground, with high grass. It seemed a good piece of defensive land if needed. The Indians thought so as well. Fetterman and his Soldiers did not even notice the several hundred well concealed Warriors due to the tall grass and uneven ground.

It was mid- afternoon on December 22, 1866 - as The Command passed down The Hill, a large contingent of Mounted Warriors rode to their front. Instantly giving fire to The Soldiers, Fetterman gave orders to form a firing line, but the resulting chaos was too much. The Soldiers began to fall back into The Hill. Orders are giving you fall back up The Hill, for having the “high ground” would be of advantage. A running gun battle up The Hill began, Soldiers falling lecture and right. Reaching the Summit, Fetterman attempted to firm a defensive circle. He must have been surprised when several hundred Sioux (led by a young and becoming well known Warrior named Crazy Horse) – rise up on his Rear and Flanks.

History stated that Fetterman and another Officer turned their Pistols on each other, shooting themselves each in the head at the same time rather than being captured by The Sioux. Their may be some truth, by Surgeons later said that his throat was cut post-mortem.

A GRISLY AFTERMATH:
Red Cloud called The Fetterman Fight, The “Battle of Hundreds in The Hand”. Just before the battle, Red Cloud dreamed that hundreds of Blues coated Soldiers fell from the skies onto his awaiting palms. This was close to truth. The Sioux were angered that their Lands had been encroached upon, and continued their fury on the dead. Every body was severely mutilated in Sioux fashion – as a message (and a warning).

Several weeks later with word, Carrington sent out Patrols to locate Fetterman. Their bodies were brought back to Ft. Riley, Kansas. Although reported in Eastern Newspaper, most read with lack of interest. But The Army was angered. Red Cloud”s War would continue until 1868, when yet another Truce was formed. A Truce which last only until 1876.

The remains of Fetterman and much of his Command were buried at Ft. Riley. Most could not be identified and were buried as such. They remain there today, the ultimate monument to a fool hardly attempt to enforce another way of life on another. 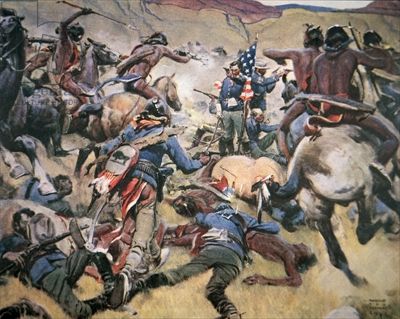