The legend of The "Essex' is a most unusual tale in Sailing History. Unusual in that it is true. The "Essex" was a somewhat successful Whaler, launched from Nantucket, Massachusetts. She was 240-tons, 88-feet long and stood 25-feet tall. She crewed 20 men. Commanded by Captain George Poland - she headed out in 1820 on a year long hunt for Sperms Whale in the South Pacific. Almost immediately The "Essex" ran into trouble. 2 days out, she was caught in a storm and severely damaged. Finally repaired, he had little luck in her hunt, due to depleted fishing grounds. Eventually, she found a Pod of Sperms Whales, yet had trouble making "kills".

Unknown to the crew of "Essex", she was being "hunted" herself. Legend states that the crew killed the Mate and Calf of a "monsterously large" Male "Bull" Sperms Whale  (said to be 85 feet long - almost as large as The "Essex" herself).
The Whale "attacked" The Ship with an almost "human-like" quality of revenge. Over and over, The Whale attacked the Ship, ramming it with it's head and swatting with it's massive tail. The "Essex" reviewed it's "death blow" when The Whale opened up a gaping hole in her hull. Sinking, only two Lifeboats survived for the 20-man crew. Little food and water were available. Starvation claimed 5 of the survivors. The remaining crew resorted to cannibalism to survive. After 45 days at Sea, hopelessly starving still, lots were drawn to see who would sacrifice themselves for "food". 7 such Seamen would die as such.

In the end, only 8 survivors -including Captain Pollard, lasted 95-days until another Whaler The "Dauphin" found them. Later, they were transferred over to The USS "Constellation". Later, Cabin Boy Thomas Nickerson related his version of the tale to a local Newspaper. This tale was said to inspire one Herman Melville to write his nautical tale "Moby Dick" in 1851.
Captain Pollard was a ruined man. Never able to get a Captiancy, his career was over. He became a Port Watchman in Nantucket, eventually retreating to his small hovel, constantly lamenting his lost crew. He died in 1870 at 78. 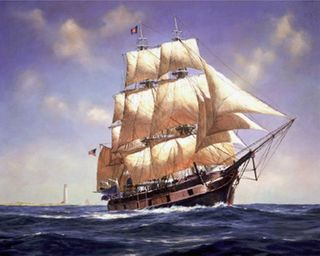