The Equestrian Order of The Holy Sepulchre

Officially known as The Equestrian Order of The Holy Sepulchre of Jerusalem, they were founded in 1099. Designed after other Military Orders of the time, they were tasked with providing aid to the sick and injured - as well as Policing the Streets of Jerusalem. They also provided military training to The Order of St. Lazarus. They often worked closely with The Order of Knights Templar (both in garrison and in combat). They used the same ranking system as other Orders (with the use of laymen). Being primarily a horse force, they would often be used in the territories around Jerusalem as a Home Guard-type unit as well. They initially wore a light blue mantle-apron with the Gold Cross of Jerusalem. After it's fall, The Order changed it's colors to White (with the Red Cross of Jerusalem). In 1496, The Order was ordered merged into other Orders by The Pope. It was revived in 1846, as a non-militarized unit - using a white mantle-apron with the Red Jerusalem Cross (still used today). The Order is currently Headquartered in The Vatican. 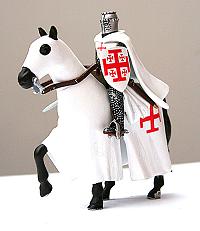