After the debacle of The Battle of Antietam (Maryland) – which was a “strategic victory” for The North (but a “tactical victory” for The South) – US President Abraham Lincoln decided to bolster the War effort – with a political move. The North had become extremely hostile to The South – with popularity in Abolitionism growing (more so because it was an affront to The South). In April of 1862, The United States Congress had abolished Slavery in The District of Columbia. This was quickly followed by it's abolition with all US Territories. Lincoln was even in “favor” of individual States setting Slaves free and compensating their Owners for the loss! He even toyed with the “idea” of using Federal funds to “relocate” those freed back to Africa (if they so wished!) In short, Lincoln was desperate to save The Union and end The War at all costs!

Still, no State wanted to move on either course of action. The North was “technically” losing The War. Thousands of casualties and deaths were reported from every Theater of Combat weekly Lincoln needed a solution. And quickly. Approached by Activist Stephen Douglas – Lincoln devised a document known as “The Emancipation Proclamation”. In it lay the foundation for complete freedom for all persons enslaved within The United States. However, the document was somewhat “vague” in it's “”enforcement”. Phrased as “all persons currently enslaved WITHIN any States currently in insurrection with The United States Government – are free”.

Further, The US Military was to take charge of all such persons in said areas (or areas under their control). Simply, The Proclamation was only effective IF an escaped (or freed Slave) – could make it to The North (or The Union Army). This created unending problems for the Army (who was ill-equipped to deal with such an on-rush of persons). But, (although The Proclamation had MANY detractors on BOTH sides) – it did create a situation by which (as a “free” man) – an African-American WAS a citizen and could vote, work (and most importantly) SERVE in his Country's military. This created the situation Lincoln needed. Over the next several years – over 180,000 “Men of Color” would don “The Blue”. This influx of men not only bolstered The Union – but helped change the tide of The War in favor of The North. 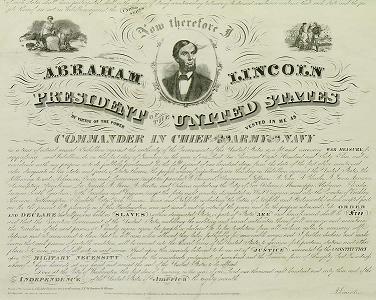