Perhaps not as infamous as The Gunfight at The OK Coral, the so named ''Earp Vendetta Ride'' was just as bloody and just as storied in American Western lore. As the term describes, a ''vendetta'' (from the Latin/Italian word for ''vengeance'' (or revenge), the incidents that transpired, while ''legally sanctioned'' probably should not have been. But first, the ''cause''.

With the death of three Cochise County Cowboys (an Arizona Territory “Gang”), at the hands of Marshal Virgil Earp, His Deputy (and Brother) Morgan, His other ''famed'' Brother and former Lawman (and Deputized too), Wyatt Earp, at the Horse Coral in The Town of Tombstone, Arizona (1881) – a series of related side events would begin. So enraged at these deaths, other Gang Members began to plan to assassinate The Earp Brothers (to include Henry ''Doc'' Holiday, who backed up The Earps during the fight). Several weeks after the shootings, and being found not guilty of any crime by a visiting Circuit Judge, The Earps settled back into a ''normal'' life. This however was not to be. First Virgil was almost fatally wounded walking home one night by an ''Assassin'' and (also that night), Morgan was killed (shot in the back). Wyatt was heartbroken. But soon this emotion turned to pure hate, and with this the need to revenge. Earp (as stated a former Sheriff and Marshal in Kansas), used His fame and connections to get Himself ''reinstated'' as a Federal Officer again. Given leave to ''arrest all Outlaws'', Earp used His position to mount a Posse of His choosing. This Posse served only one real purpose. To hunt down Ike Clanton, Bill Brocius and other members of The Cochise County Cowboys – and kill them.

Earp's younger Brother Warren was deputized to ''protect'' The females of The Earp Family while Wyatt commenced His ''search''. Joining Him, was longtime friend John Henry ''Doc'' Holiday. Sherman McMasters, Jack Johnson, Dan Tipton and John Vermillion. While Holiday's ''infamy'' as a ''fast gun'' was known throughout The West, the others had both former Military Service (Civil War), or had been former Outlaws themselves. Nonetheless, all were ''quick shots'' and trusted by Earp. He deputized all.

Frank Stilwell was a high placed Member of The Cochise Cowboys and was given the task of orchestrating an assassination against Wyatt and Virgil Earp (said to be leaving Arizona, via the rail at Tuscon). Getting the help of Ike Clanton and several others, they waited in hiding at the rail head to strike. Earp and His men ''got the drop'' of Stilwell first. While Stilwell was killed, Clanton and the others escaped. But Stilwell was also the friend of crooked Tombstone Sheriff John Behan. Angered by His death, Behan formed His own Posse (mostly Cowboy Gang Members) and found a Judge to issue Arrest Warrants against The Federal Lawmen, citing that Earp was using His ''Color of Authority'' to ''legally kill'' suspects of Morgan Earp's death – without ''due process''. The Behan Posse numbered about 30 men.

Behan and His legal ''Outlaw Posse'' pursued Earp and His throughout both The Arizona and New Mexico Territory. Behan and His men never outwardly engaged Earp, who systematically began to ''remove'' any and all Cochise (or suspected) Cowboys. To further exacerbate Behan's problem, a vast majority of Businessmen and Ranchers throughout both Territories were in full support of Earp – even aiding Him and His Men. Frustrated, Behan decided to disband His Posse and return home to Tombstone. However, many of His posse, now unfettered by their ''deputized'' status, broke off and continued to track Earp.

In The Whetstone Mountains of Arizona, Earp and His Posse were finally attacked by Bill Brocius and other former Behan Posse Members. Still outnumbered, Ea4rp and His Forces defeated Brocius (Earp killed Him) and drove the rest off. Later still, others of this ambush would be tracked down and killed. In all, the nearly 1 year venture rounded up with the death of the hierarchy of The Cochise Cowboy leadership (6 killed). Without any formal command, The Cochise Cowboys would fall apart around 1883, never to be a force again.

Many felt that Earp did in fact use the ''color of authority'' (a crime), to justify the killing of all responsible for the crippling of His Brother Virgil and the murder of His other Brother Morgan. But many still felt that after nearly 10 years of being terrorized by The Cochise Gang, the eventual ''methods and means'' outweighed the legal misuse. Earp was never brought up on any charges. He resigned His commission as Federal Marshal in 1883. Leaving Tombstone, Earp would have another 50 years of ''adventures'' until His death from old age (80 years) in 1929. John Holiday would die from tuberculous at the age of 36, scarcely 6 months after the end of The Vendetta Ride in Colorado. The others would go on to ''other things'' (some famed, others not so). But all would go down in Western History as being part of the great (and infamous) – Earp Vendetta Ride. 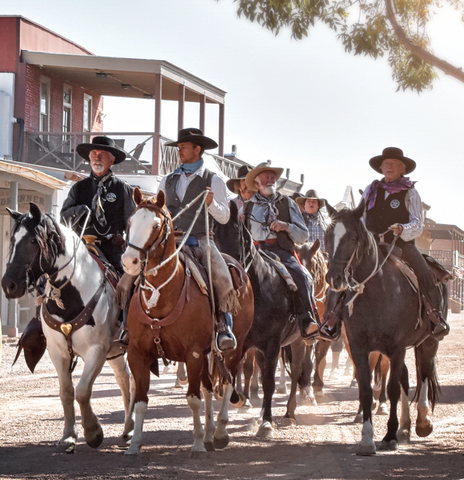