Another somewhat iconic ''image'' often portrayed regarding The American West – is the ''Double Style'' Gun Holster carry method. Hardly had any American Western Novel or Movie NOT included a Gunfight or battle that did not show a Hero or Badman using two holsters strapped to his (or Her) leg. In reality though, this ''fighting method'' was not seen as much as one would think. Again, the need to use double holsters was born more out of the need for increased firepower than anything else. A ''standard'' Wheel Gun (cylinder activated), had 6-shots only. A Gunman carried as many as 10 to 15 more placed through holders placed on His Belt (reloading devices were unheard of as yet). Quite simply, another Gun meant more bullets – nothing more.

Mostly Outlaws were drawn to the Double Style, but soon Lawmen too adopted it. It was mostly seen around the late 1880s and again, not as much as one would think. A Gun was rather an expensive item for most (costing as much as $10 USD! - a large sum for most). Two Guns would have been unheard of. Most who needed ''additional'' firepower often relied on a Repeater Rife or even a Shotgun for such needs. Some of The American West's most 'infamous Gunmen and Outlaws did not use the Double Style. Most were content to carry additional Guns in coat pockets, trousers (stuck through the belt, worn directly over the lower back).

Also, many Gunmen were NOT able to shoot with both hands. Those few (and rare) that could, were the only ones that who have any real use for The Double Draw method. Conversely, very few examples of Double Draw ''Gunfights'' ever occurred. Much of The Double Holster method was ingrained into Western ''Culture'' by virtue of The ''Penny Novels'' (hugely popular in the 1880s thru 1890s), and of course the many ''Wild West Shows'' of the later Era. ''Trick Shot'' Experts and ''Stage Gunfighters'' made the use of The Double Holsters almost a ''requirement''. Even today, most Modern ''Gunfighters'' in Theme Parks throughout The World have adopted the ''look'' of The Double Holster. 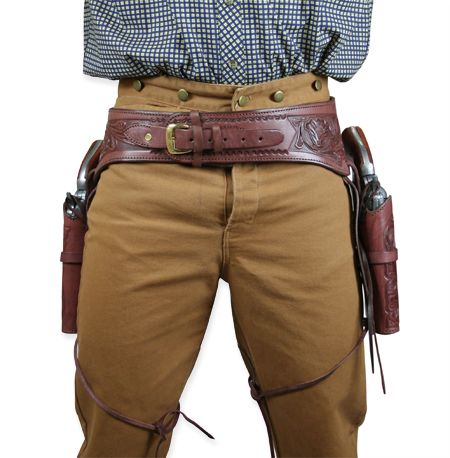