The Dagger of Col. TE Lawrence

A deep and complex man, T.E. Lawrence was an Academic with a Degree in Archaeology. He was an expert in Middle Eastern history. Commissioned into The Royal Engineers as a Lieutenant, he was sent to The Middle East to conduct land surveys - when World War I began. His knowledge of the region got him assigned to The Bureau of Arab Affairs. This led him to serving as an Adviser to Emir Faisal (of The Kingdom of Syria). Very soon he had helped Faisal build a proper Army accomplished at "cut and run" tactics against The Turks. Armed with an assortment of weapons (from musket to machine gun), Lawrence and his Arab Army were very effective at disrupting Turkish supply lines and stopping their advances in Syria and beyond. Lawrence was able to take the City of Aqaba by the desert side (an impossible feat in those days). He also would take Damascus and Medina. These actions would earn him the nickname of "Lawrence of Arabia". After his daring desert exploits, he returned to England. Still colorful in civilian life (trying to join The RAF under an assumed name) and writing an acclaimed book (The Pillars of Wisdom), he would die as the result of a motorcycle accident in 1935. He was known for his donning of local tribal clothing (a Sharif). Rather than carrying a sword, he preferred his service pistol and a gift given to him by Faisal in 1917 - a Janbiya Dagger (often photographed and painted wearing it). The Jabiya was a symbol of manhood amongst all male tribal members (14 years and up). The blade is a curved, 12-inch weapon - gold plated with precious stones. The blade was single-edged. The dagger and a matching scabbard and belt are on display at The Imperial War Museum, London, England. 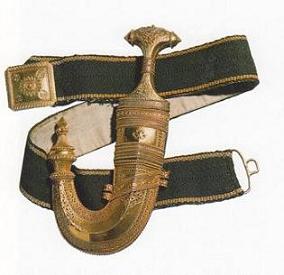