MANY studies and books have been conducted (and written) – regarding “The War of The Cross”. In short, a Crusade was (in Christianity) – a “Holy War”. Often initiated by The Catholic Church (the most powerful of Governing bodies at the time) – declared that it was the “right” of “all Christians” to free The City of Jerusalem (and The Holy Lands), of all “non-Christians. Supported (originally wholeheartedly) – by Kings and Kingdoms throughout Europe – A Crusade was a costly effort. It could take MANY months to build and equip a sizable enough Army (and move them) – to The Middle East. Often internal “problems” between rival Kingdoms and Nations – led to more problems than actual battles and engagements with The Muslims. In most cases, if one “took up The Cross” (as fighting in The Crusades was known then) – remission of family sins and a fast track to an “eternal reward” was often “preached”. Mostly, The Crusades was a period of gross mismanagement on behalf of the Rulers of not only The City of Jerusalem – (but the so-called “Crusader States”). As time progressed and more “losses” instead of “gains” were experienced, Rulers (as well as The Church), realized that The Middle East (and The Holy Land), could NOT be pacified. Whole Nations fell into bankruptcy as a result of a Crusade (not to mention the loss of a Crown or two). There were 7 “official” Crusades in the 200 year (on and off history of the conflict). Here is what (and when) they were:

THE FIRST CRUSADE (1096-1099)
Inspired by Peter The Hermit and Pope Urban II, it began with great fanfare and enthusiasm. Initially nothing more than a “Rabble Army” MANY died of disease and starvation (as well as Turks). A better equipped Army led by Godfrey of Bouillon and Robert of Normandy (William The Conqueror's Son), will eventually capture The City of Jerusalem in 1099. The Christians were noted for their excessive slaughter of all non-Christians (and non-Converts). Offered a Kingship of Jerusalem for his “bravery”, it was said Godfrey refused to accept the title of “King” in “The City of Christ”. His successors were NOT that humble!

THE SECOND CRUSADE (1146-1149)
Started by King Louis VII of France and Holy Roman Emperor Conrad III, Nothing was really accomplished accept huge numbers of losses and MUCH money spent. In 1187, Muslim Warchief Saladin would defeat The Crusader Knights at The Battle of Hattin (and retake Jerusalem).

THE THIRD CRUSADE (1189-1192)
Holy Roman Emperor Frederick Barbarossa and King Philip II of France (with King Richard I of England as primary battlefield Commander) – had all that was necessary in terms of men and material, to defeat Saladin. Unfortunately, the 3 Leaders ALL had some issue with one another. Lack of coordinated efforts and teamwork would leave Barbarossa dead (drowned), and Philip almost broke from his venture. Richard of England and Saladin entered into a truce for Jerusalem. Richard (however) NEVER entered “The Holy City”. He was be killed by a French Crossbow (in an engagement on the way back home to England).

THE FOURTH CRUSADE (1202-1204)
The Turks took advantage of a weakened and tired Europe to halt and divert a Crusader assault to take Constantinople. Lack of troops and funding caused this to be one of the “shortest” of The Crusades.

THE FIFTH CRUSADES (1218-1221)
This Crusade was aimed at Egypt, and the reports of a “massive” Christian Army approaching into the Country, caused many Egyptian Administrators to offer The City of Jerusalem to The Crusaders. Unfortunately, Muslim Leaders refused to negotiate with the “infidels”. By the time the “discussions” were officially ended – The Crusader Army had to return (due to lack of continued supplies and funds).

THE SIXTH CRUSADES (1228-1229)
Holy Roman Emperor Frederick II (not to be undone by the “lack” of negotiations with The Muslims from the previous “effort”), successfully termed a truce with The Muslims and a return of The City of Jerusalem. He was excommunicated by The Church for “overstepping his boundaries”. Nonetheless, The City will remain in “Christian” hands for another 15 years.

THE SEVENTH CRUSADES (1245-1269)
The last “official” full Crusade, it was initiated by King Louis IX of France against Egypt. Successful (in the beginning), Louis (who personally took command in the field) – will get sick and captured. Ransomed and later back in Palestine for another 3 years, he was forced to return to France after the death of his Regent. After setting his “house in order”, he headed for Tunis – and died of a fever. Enter England's Edward I. He entered into The Holy Land, but by this time found little to no “adventure”. Lacking support back home, Edward (and his Army) – left. It was said that an “Eighth Crusade” was contemplated by England's King Henry IV. Lack of any support by The Church ended his quest. 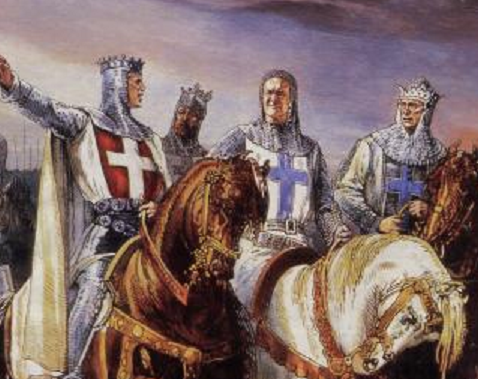