Also known as ''The Clacker'', these were originally children toys popular in the 1930s. As such a common toy would become a major communications device which saved many Allied Solider lives. Primarily produced by The Acme Company on England, The ''Cricket'' was a small brass metal, hand held toy. Roughly, they were made from 5-inch pieces of the alloy, bent over and fashioned into a ''C''-shape. The thinness of the metal made it easy to ''squeeze'' or pinch with just a thumb and forefinger.

Inside the body of the device was a spring which provided the necessary tension when squeezed to made a single clicking noise (as a result of the thinness of the bent metal, somewhat amplified by it's bent shape). Subsequent clicking made more clicks. The device was supposed to imitate the clicking of the insect known as a cricket (hence it's name).

With World War II entering 1944, allied Forces planned and finalized Operation: Overlord (which was the all-out Invasion of German Controlled Europe). The massive undertaking would be a communications ''nightmare'', as Commanders reasoned how to maintain local control of ground troops during the initial phases of the Invasion. Commanders of The American 101st Airborne Division came up with the idea of providing Crickets to all of it's Paratroopers.

The reasoning was simple. While verbal Sign and Countersign commands were in use for Units, coded responses changed every 24-hours. This made newer codes impossible to use when Allied Soldiers possibly encountered friendly or Enemy positions. Using the simple Cricket was seen as a viable measure of temporary communications.

To form, when the Invasion began – thousands of American Paratroopers were blown off course during their landings in France. Mostly lost and in the darkness, Units encountering each other would click their devices once. If they received a double click in return, they were considered friendly. If no response or two clicks were not given – the contact was an Enemy.

After The War, thousands of Crickets came home as mementos, with many Grandchild children happily clicking away on s cheap toy that saved the lives of thousands. 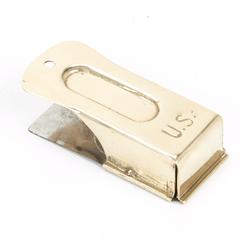