The Councils of Toledo

The Councils of Toledo were 18 Church Councils formed in the Spanish City of Toledo. Staring in the 4th Century A.D. And extending into the 7th Century (ending with The Moorish Invasions of Spain). Toledo was then under Visigoth control (being THEIR Capitol since their 6th Century conversion to Christianity). Councils were conveyed roughly every 100 years. The basic discussion centered around conversion of Pagan cultures. In the 5th Century however, The 5th Council had a crisis. A new Visigoth Ruler had wished to reconvert his peoples back to Paganism (Arianism). This would have meat the loss of Toledo and unknown reprisal deaths. However, The new King realized, that the vast majority of his Subjects were happy as Catholics. Fearing a “revolt” poised at him, he withdrew his plans. Bishops, Abbots and Cardinals were mostly in attendance at a Council session. By the 7th Century (and their end), Councils “met”” every 10 years. This ended with the Moor Conquest of 711 A.D. 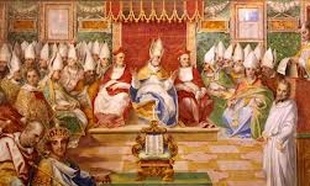