The Constitution of Clarendon

These Decrees were established by England's King Henry II in 1164 A.D. (established in Clarendon, England) - as a way to create a “formal” relationship between his Crown and The Catholic Church. The Constitution stated that appeals to Rome (from Nobles and Clergy), were strictly forbidden WITHOUT Royal approval. Further, all litigation between Clerks of The Church MUST be heard by a Royal Court. It also stipulated that ANY Clergy “leaving” England must seek “permission” from The King to do so. Instantly The Church and Clergy opposed The Constitution. Other “by-laws” (and the most problematic for Henry, at least), was that ANY Clergy convicted of a Crime MUST be tried by HIS Court. This naturally, was an affront to Church power and control. Only “slightly” followed in his Reign, it would be Archbishop of Canterbury (and close friend to Henry) – Thomas Becket who would seriously challenge his authority in The Constitution. With Becket's “murder” in 1172, Henry had no choice but to rescind The Constitution – or face excommunication from The Church. 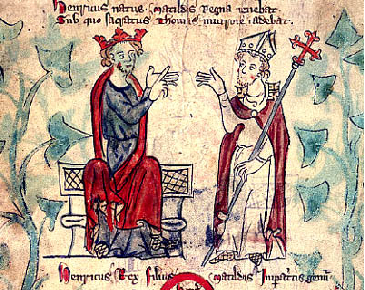