The Concordat of Worms

The Worms Concordat was a compromise document drafted in 1122 A.D. - between The Catholic Church and The Holy Roman Empire. A debate had been on going throughout The Middle Ages regarding the disposition of Church Offices. Who chose who? Obviously, The Church (under then Pope Gregory VII). These men were serving members of The Church. It was up to them to install whom they felt fit. Holy Roman Emperor Henry IV disagreed. These positions should be filled by men loyal to The Crown (Holy Roman). This running debate became known as “The Investiture Controversy”. No clear cut resolution was offered. Neither side agreed with the others choices.

In some cases even assassination became fashion. A similar matter developed between Rome and England (1107), but the matter was resolved. Using this incident as a template, both sides spent 15 years attempting to find a settlement each could agree with. This agreement was The Concordat. In essence, the document stated that Bishops and Abbots were elected and created by The The Church. The Emperor had the right to settle contested elections or break deadlocks. Also, as part of their vows, each man had to take an “Oath of Loyalty” to The Emperor in addition to his vows to Rome. 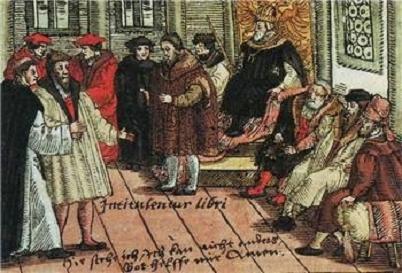