The Colossus of Constantine

Once seen as an Ancient ''Wonder'', The Colossus of Constantine was constructed in honor of Roman Emperor Constantine, between the years of 312 to 315 AD. It once occupied The Basilica Nova, which was part of one of Ancient Rome's largest Forums. It was claimed to have been built to commemorate Constantine's victory at The Battle of Milvian Bridge in 312 AD (as was The Basilica Nova).

Said to have been 40-feet in height, the Marble construction may have been cover in Gold Plate. As such it may have been ''pulled'' down to steal it's Gold during some of the earliest Sacks of The City of Rome by invading Gothic Nations. This may also be how the massive statute was broken up.

Never repaired, most of the ''body's'' pieces have be lost (or broken up and repurposed). However, The Emperor's Head, Hand, Knee Cap and portion of Right Foot have survived. These components were once ''owned'' by Italian Artist and ''Renaissance Man'' Michelangelo in the 14th Century AD, who kept them at The Palazzo dei Conservatori (where they remain today). 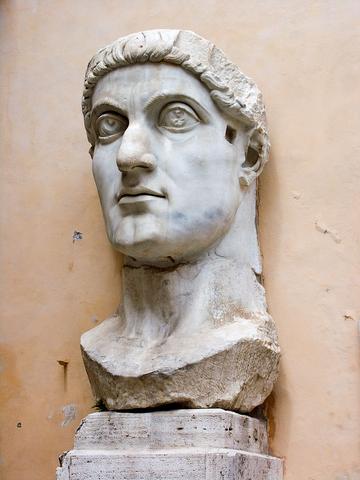