Somewhat over-dramatized by The Hollywood Film “Tombstone”, and the earlier “Gunfight at The OK Corral” – The Organization known as The Cochise County Cowboys were the “real-life” basis for the Film. This “Gang” is considered one of the first examples of American Organized Crime.

BACKGROUND:
The term “Cowboy” (which was unknown before 1870), has “romantic” and traditional images of hard working and rustic Men working The Ranges and Plains of the 19th Century American West. In reality, the majority of Cowboys were searching for work. Driving Cattle Herds, paid low wages. Despite this, it took skill in Horsemanship and Firearms. It was more small stretch the many turned to Outlawry. Often, Lawmen were tied to their jurisdictions and often would not pursue an arrest. Most Lawmen were themselves former Outlaws and Professional Gunmen. Federal Marshalls (with Territorial Authority), were likewise, “few and far between”. It was into this landscape that The Cochise County Cowboys were born.

THE GANG:
A loose Confederation of Outlaws, The Cochise and Pima, Arizona Territory Cowboys were under the joint leadership of Okeechobee Clanton and William “Curly Bill” Brochius. Both were known Cattle Thieves (Rustlers). Tom and Frank McLaury and John Ringo formed the nucleus of The Gang. Their numbers swelled to as many as 80. These were small-time Thugs and Outlaws. The Gang worked The Mexican Border, stealing Cattle and moving them into The United States. The Mexican Government cracked down on The Gang, forcing them to steal Cattle in The States. Changing the Cattle Brands (or Marks), these would be resold. The Gang also struck Stagecoach Lines. They avoided Trains and Banks. Loyalty in The Gang involved a “Blood Oath”. The Leader and initiate would cut each other’s arms or hands, mixing their blood. Betrayal was met with death. It is said that The Gang wore Red Army Officer Waist Sashes, but some say they wore some form of Red Clothing. Highly debated either way, the Red Coloring was used to identify one Gang Member from another. Also known unofficially as The Clanton Gang, they Headquartered themselves in Tombstone, Arizona.

THE LAW:
As mentioned, Law Enforcement was problematic at best. This was seen as a great advantage to The Cowboys. Often, Lawmen were bribed to allow The Cowboys free reign. The problem became so large that The Territorial Governor requested help from The US Army as well as additional Federal Marshalls. Neither was of much help. That is, until the famed Law Enforcement “Family” The Earps moved into Tombstone. Morgan, Virgil and Wyatt, who had made “a name for themselves in such Frontier Towns as Dodge City, Kansas – had moved to Tombstone to capitalize on the growing Gambling and Real Estate Market. Immediately running afoul of each other’s “reputations”, The Clanton Cowboys and The Earps were Enemies.

DEMISE:
Eventually, the Feud would boil over in the infamous and we’ll known, 30-seconds Gunfight at The OK Corral on October 26, 1888. Although Canton escaped, The Laury Brothers and off and on Gang Member Billy Claiborne were killed. Morgan Earp was severely injured. Later, Virgil Earp was assassinated by Clanton  in retaliation. This would lead to Wyatt Earp being made a Federal Marshall and the creation of his famed “Vendetta Ride” against The Cowboys. All were hunted down over a 2 year period and killed. Those who weren’t, like Ike Clanton – would die as they had lived, in Gunfights. The power of The Cochise County Cowboys were broken by 1890. 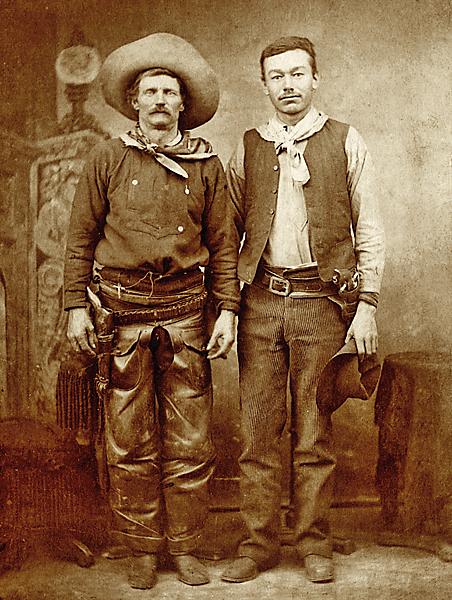