Occurring in July of 1378 in Florence, Italy -The Ciompi Revolt was an uprising of the Artisan Class against the Major Guilds which controlled The City of Florence. The Guild had worked it's way into City Government. They had begun to lower the wages of Artisans within The City and refused to allow them a “voice” in enacting (or voting) laws (many which governed their business). Armed, large groups of Artisans began to attack Guildsmen (and their businesses). The larger of the rebel groups, The Ciompi – were comprised of Carpenters and Woodworkers. They (in addition to their lowered wages), took issue with the Civil Government for allowing The Guilds to become so powerful. The Florentine Army was eventually turned out – with the predictable Italian bloodshed in the streets. Many hundreds of Ciompi were killed. The revolt was not without concessions. After the rebellion, Civil Government retook control of City affairs and removed most Guilds from “civil power”. This would last only 4 years however, with The Guilds resuming power in 1382. 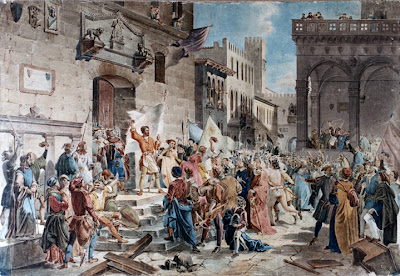