The Charleston Riot of 1864

Although The American Civil War raged for 4 years – with bloody battles and engagements filling local Newspapers in both The North and South, many forget the like many civilian disturbances which developed as a result. Both North and South had their fill of various Political confrontations which did not always happen in Government Halls. The Charleston Riot (Illinois) in the year 1864 was one such Event. The ''Forces'' were local Union State Militias against the previously discussed Confederate sympathizing Organization which operated in The Northern part of The Country known as ''The Copperheads''.

With the goal of disrupting Political and Military support for The Union Army, The Copperheads tried many times – operating both ''in the shadows'' and ''in the light'', to cause many Northern citizens and quite a few Veteran Soldiers (wounded and maimed), to agitate for both the removal of US President Abraham Lincoln and to force their Representatives in Government to ''sue for Peace'' with The Southern Confederacy. While many lower level Copperheads were arrested, many more outspoken Leaders of the Movement operated more or less effectively. Their favored tactic was to exploit the constant listing of battle casualties and deaths suffered after a major battle.

The Riot in Charleston, Illinois on March 28, 1864 – centered on a known Copperhead Supporter and Federal Judge, noted for his leniency towards Union Soldiers who had been captured as Deserters. So constant in His rulings of letting these Men go free, that the local Militia took matters into their own hands and accosted The Judge. They forced Him at gunpoint to ''swear and Oath'' to ''Support The Union'' (and other ''humiliations''). While their numbers are in dispute, over 100 Copperhead Supporters ''came to the aid'' of The Judge, armed with guns, swords and clubs. They were determined to remove The Federal Soldiers and declare The Town ''Confederate''.

After forming at The Courthouse, The Copperheads were greeted by a 400-Man Militia. No tense words, no withdrawals, The Militia fired into the Protesters. Although initially crippled, The Crowd returned fire. A literal ''skirmish erupted'' in Town. Lasting for several hours, the end result was a ''Union Victory'' with hundreds wounded on both sides, with a total of 8 killed. The incident was reported Nationally, and although seen as a ''propaganda'' victory for The North and a means of establishing ''what would happen to traitors'', The South was able to use the event for their purposes as well. The Riot of 1864 would served to spur a rush in later War recruitment in The Midwest in support of The Union Army. 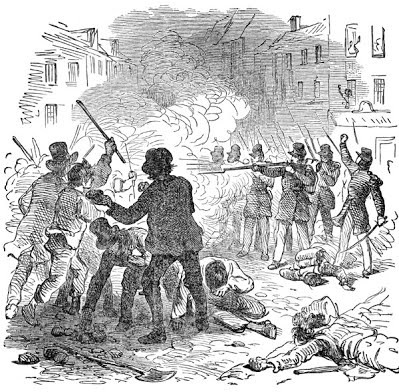