Hired 14th Century Mercenaries, The Catalan Company were Men at Arms from Italy that were Commanded by Roger De Flor. He was trained by Templar Knights in Warfare and Tactics, and applied much of his skills to the founding of a “For Hire” Band of Soldiers active in many of The Civil Wars in Medieval Italy. His Company of Soldiers (who at one time were number at roughly 6,000), were unusual in that in addition to Land Warfare – were also well trained as “Fighting Seamen”. They were quite possible one of the first “Mercenary Marine” detachments.

Hired by The Byzantine Empire, The Catalan Company in 1302 successfully relieved The Siege at Constantinople. The Company helped augment Byzantine Forces there until they were finally forced to relinquish their positions in 1304 to The Turks. Effective fighters in the relatively “new” Military advance of Firearms, with the assassination of De Flor in 1305 by Turks, The Catalan Company decimated much of Macedonia in revenge. After making much in plunder, The Catalans disbanded – settling into the Regions that they had taken. 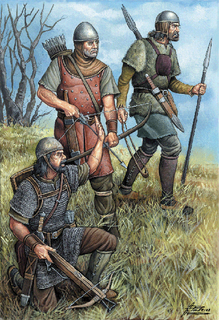