As we have seen, The American Military did not have any specific Medals or related Awards issued to it's Army or Navy – that served during The ''Wear Between The States'' (1861-1865). The then  ''recently created'' Congressional Medal of Honor (The Medal of Honor, The Nation's highest and most scared of Awards) – was often ''incorrectly issued'' (to Acts, often Heroic and worthy – but not necessarily with the criteria of The Congressional Medal of Honor). A much later ''Civil War Service Medal'' WAS created by The US War Department in 1905, and awarded to those Soldiers and Sailors who served during The War (in any Military capacity).

Also as written, several unauthorized Medals (eg ''The Kerney Cross'') were created by noted Union Civil War General Officers. These were awarded to certain Officers and Men within The General's Division of related command – who had performed a specific ''act of heroism or gallantry''. Coveted by their Recipient's long after the end of The War on 1865, as stated The US Government does not recognize them.

In particular, The ''Butler''Medal – was created by Union Army General Benjamin Butler (nicknamed ''The Beast'' by Citizens of the captured Confederate City of New Orleans in 1862), it was also given with some controversy. The Medals were given (mostly), to some of the first African-American Soldiers to be allowed to openly serve in The Union Army (a result of The Emancipation Proclamation of 1862). General Butler financed the creation of The Medals from his own pocket and award to various Black Soldiers of His ''Army of The James''. Indicative of Butler's Command, (14) African-American Soldiers would also be awards The Congressional Medal of Honor for combat actions during The War.

The ''Butler'' Medal was a Silver, circular Device. The Front bears the engraving of African-American Soldiers charging an Enemy Fortification. The Latin phrase, ''Ferro lls Libertas Perveniet'' or translated to ''Freedom Shall Be Theirs by The Sword''. Another smaller inscription on the lower front read ''US COLORED TROOPS''. The Rear of the device featured a wreath with the phrase ''COURAGE” and an engraved wording of the particular Campaign the Recipient earned The Medal for.

The Ribbon was a series of Red, White and Blue vertical Stripes. An attached Silver Clasp read ''ARMY OF THE JAMES”” The actual number of Recipient's is unknown as no official records of issue were kept (or survived). Those examples still in existence are in private collections. 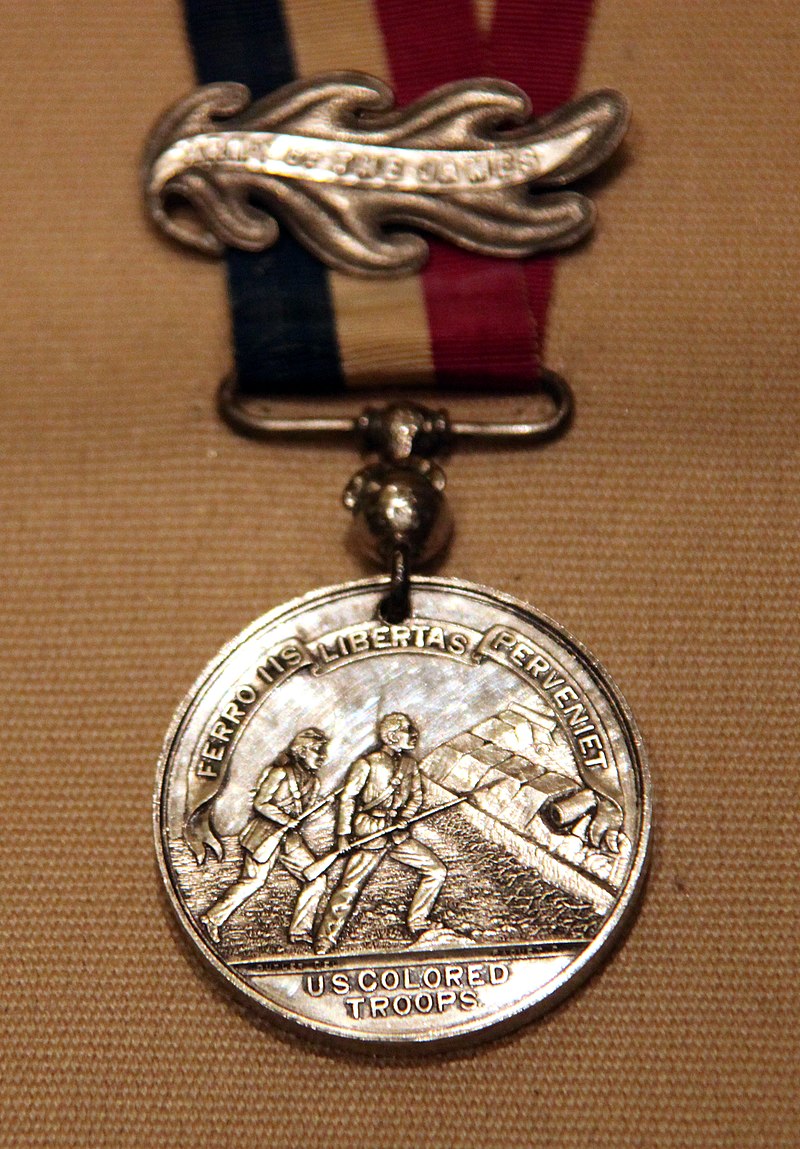