The Brethren of The Common Life

The Brethren were a secular teaching “Order”, that influenced education in The Middle Ages for nearly 400 years. The Group believed that even the poor (or Common) children were worthy of learning. Initially supported by wealthy benefactors, The Order made most of it's monies through the “art” of Copying. As Copyist's, they worked cheaper tin transcribing books and manuscripts (than a Monk). Founded by Gerhard Groote (a wealthy Netherlander Merchant) – he “turned his back” on wealth and worldly passions (giving away all his wealth). As a “Reformer”, he preached a life of piety, poverty and a genuine need to help the poor. Gerhard used his own home as the first “shelter and school” for poor women and children in the 1370s. Groote died in 1384 and left his “Order” to his most trusted follower – Florenz Radewijns. It was he that called the group “The Brethren”. He petitioned Pope Gregory XI for sanction (which was given). The Brethren were NOT Ordained, and concentrated more on establishing schools for the poor. They also formed a female Order known as “The Sisters of The Common Life” (similar to The Poor Clares). As “Lay Persons”, they followed the “Monastic Rule”. However, with the development of The Printing Press, their need as Copyists quickly faded (as did their wealthy supporters). The Order died out with the closure of their last House in 1811. 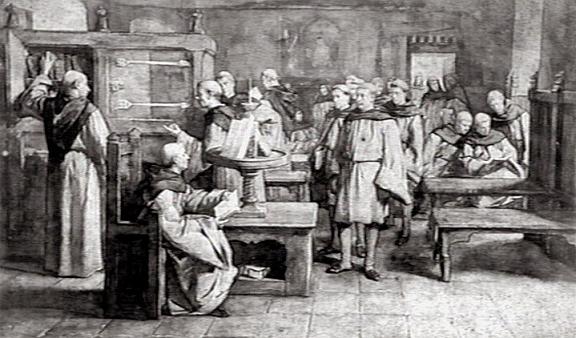