The Brethren of The Coast

Historians have long debated the existence of the Pirate Organization which called itself “The Brethren of The Coast”. In later Eras, a sub-Group was also formed known as “The Brethren Court” (which was seen as an “Administrative” and “Governing Body of Pirate Captains. The debate is that Pirates were notoriously ungovernable people and fiercely independent. Any “organized Group” of Leaders (assuming they could even agree as such), was problematic. In the 17th and 18th Century such an “Organization: did repute to exist as “The Brethren of The Coast”. This collection of loosely associated Pirate Captains operated under Marques and Reprisal Warrants from England (who was constantly at War with Spain – on and off). This Organization operated several large Fleets of Ships in both The Caribbean and Atlantic Oceans.

A “Code of Conduct” (which was a common Practice on Pirate Vessels) – was drafted which united all “Fleets” under the governing body of The Brethren. Shares of captured loot and slaves were given appropriate percentages. Although no exact numbers of Ships and Men were known, The Brethren possibly operated at several hundred Ships. Many locations are speculated at for being a possible “Land” Headquarters for The Brethren, but more than likely if they did exist – they did so at Sea, coming together in loose “Parlies” to discuss Raid and dividing captured plunder. Historians also debate several crude and rare drawings of an Organizational Flag. Like most Pirates, The “Jolly Roger” (or Skull and Crossbones), was the norm for identifying a Pirate at Sea. Few examples show a Brethren Flag at being a Centered Skull on a Black Field. Twin crossed Cutlass appear below The Skull. The Swords (unlike traditional images) - have “inverted” blades. 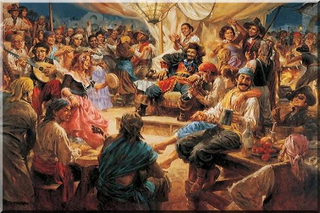