March 5, 1770 would serve as the ''Spark'' to the ''Powder'' which would inevitably fire ''The Shot Heard 'Round The World''. It was on this date, The American Colonies of Great Britain drew themselves over the imaginary line which would lead to War with their ''Mother Country''. History paints a very different picture of the Event (depending one which ''side'' tells the tale). From past hindsight, one can draw very different conclusions.

Since 1768, The Colonies had been subjected to heavy Taxes against them (economically) from Great Britain. In part, since The Seven Years War (a global Conflict with England and most of Europe as major players – and known as The French and Indian Wars in North America) – Great Britain needed monies to re-fill it's coffers, emptied from the long Conflict. Seen as a means of ''fairness'' with regards to all Colonies paying for their protection and overall economic and social stability, these Taxes would be seen as somewhat high and unfair by The American Colonies. Levied Taxes on foods and goods both into and out of The Colonies, would earned the name of The ''Intolerable Acts''.

Spurred by young Radicals and Revolutionaries who attracted a like crowd of followers (many who would go on to be the very Founding Fathers of an independent United Colonies and later States), dissent and distrust called for separation between The Colonies and Great Britain. The feeling of which – which not popular among many Common Men and ''Blue Blood'' Aristocrats – was nonetheless advanced by pamphlet after speech. Many ''working Men'' saw a vast loss in income (and high costs for basic needs), with The Aristocracy too, see a ''bleeding'' of their profits as well.

1768 too was a years in which Great Britain sent several battalions of The King's soldiers into Boston, Massachusetts to Garrison. Mostly young and inexperienced, these Men and their Officers were seen as a means of ''maintaining order''. This was not a popular move with the young and radical types found in the ''Viper's Nest'' known as The City of Boston. Despite efforts to maintain peace (on both sides), fervent groups such as ''The Sons of Liberty – saw no need at peace with a ''Mother Country'' bent of cruel and heavy handed tactics.

In the center of Boston, the Garrison of The 29th Regiment of Foot placed various ''Street Sentries'' to monitor the many radical speeches being given. Perhaps the sight of the ''finely dressed'' British Soldiers excited a group of youth who began to ''verbally accost'' the young soldier at His Post. The crowd would growth – far over this young soldiers ability to control it. He sent word for help back to the Garrison. Six additional soldiers and an Officer arrived. Seeing the angry Crowd, the Officer formed His small detachment into a semi-circular Formation. He gave the order to fix bayonets. It was assumed that each soldier carried a loaded musket.

The Crowds were not phased. Soon snowballs (it was Winter) – and trash were being hurled at the soldiers. To their great discipline, they stood through this. That is until rocks were placed inside the snowballs and thrown. One hit our gallant Sentryman. Falling to the ground, some say He uttered the phrase ''Damn Them, Fire''. Most agreed that whatever was said, no official orders to engage The Colonists were ever given. Perhaps the struck soldiers Mates saw Him in danger. Perhaps many things.

The soldiers fired their muskets into the Crowd of Dissenters. (6) Men fell into the snow, now quickly turning red from the spilled blood. Chaos and panic reigned, with cries and screams from participants and spectators alike. The Detachment's Officer quickly ordered His Men and began His retreat back to The Garrison, several blocks away. (3) casualties would die before the night was over (2 immediately). The rest would die withing weeks of their wounds. One, who died in 1780 was said to have suffered His remaineder of life in pain die to His injury (finally giving in 10 years later). Word and hostilities spread.

It was obviously, what the Newspapers of The Day terming ''The Massacre at Boston'' was a severe blow to peace. If Britain sent more soldiers, War would easily raise it's ''head''. Cooler heads on both sides were determined to hold a proper Legal Trial. Law and Justice would be served. Oddly coming from one of The Colonies most fervent Radicals – one John Adams, a Lawyer. Despite His opinions, Adams was a ''just Man'' who believed in the ''Rule of Law''. He was hired by The Officer and Men of The 29th Regiment to represent them against Charges of Murder. Adams took the Case (making Him immensely unpopular).

In short, The Trial centered around the Soldiers being justified in their use of force, based upon the hostilities of The Crowd. Maintaining order, the soldiers simply defended themselves when they were attacked. Whatever casualties that arose from such actions, were predicated on the casualties actions, not those of the British soldiers.

In the end, Adams won a partial victory. Several of The Soldiers were aquited with several found guilty of Manslaughter. As serving soldiers, their ultimate punishment was to be Branded on the hand. The actions of The Crowd were admonished (officially). Adams reputation was tarnished, but many understood the need to conduct the trial fairly. His beliefs in future independence for America from Britain would never tarnish however, as it was Adams who advanced His belief and would represent Massachusetts in The Colonial Congress of Philadelphia, in 1776 when a Declaration of such was warranted to King George III.

The propaganda factor of The Massacre was priceless. Soon images appeared far and wide throughout The Colonies, often playing down the fact that The Crowd was unruly and violent – with The Soldiers being the aggressors. The Massacre served to lionize many formerly unwavering opinions about separation from Great Britain – both from the ''working class'' and Aristocrat alike. This opinion would be put to test in April of 1775, when a Company of British Soldiers tried to cross Lexington Green and disperse an American Militia................ 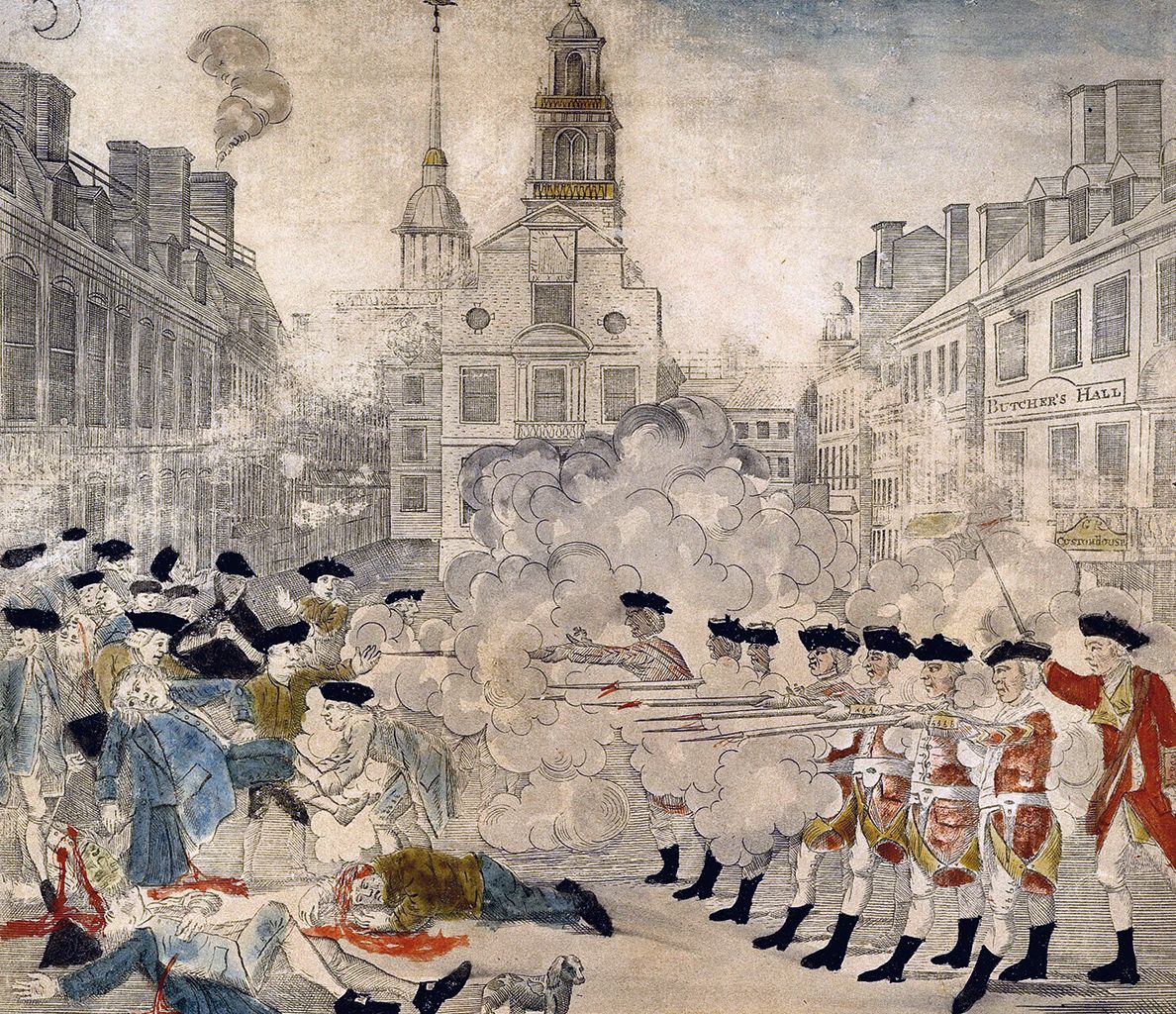