This powerful and notorious family from Valencia, Italy – were prominent in the 14th and 15th Century. They held sway over Church Authority (at it's highest level), controlled and commanded Kings and Queens and could easily have assassinated anyone who attempted to usurp their control. The Borgia Family also had a reputation for it's debauchery and excess. Alfonso Borgia (b. 1378), was the first. He rose to prominence as a noted Jurist and well placed friend to Pope Callistus III. Helping to fund the Pope's ill-fated military expeditions against Constantinople, he was rewarded by having his Nephew (Rodrigo) installed as Cardinal.

Wealthy beyond measure, Rodrigo lived his life more as a playboy than a Cleric. He also was able to get elected Pope!. Although somewhat base, Rodrigo was able to create an alliance between Rome and France (although many felt that the treaty was more out of Borgia money that religious means). Several Borgia women “married into” The French Royal Court – as well. Rodrigo (Pope Alexander), was said to have so many illegitimate children that it would take “several weeks for him to visit them all!”. His Son (Caesar), soon surpassed even him in his debauchery and political intrigue. Known for his assassination connections, he was the one who cemented (and removed) – any obstacles to his Family. It was even said that his “orgies” in his “secret room” in The Vatican were legendary.

The Papal States saw no loyalty to Pope Alexander. Therefore, a systematic removal of any Lord, Mayor or Public Official was enacted by Caesar. Wild charges, altered evidence – flat out murder, all methods were employed. It is a fact that Niccolo Machiavelli based “The Prince” on Caesar and Alexander (perhaps all Borgia's). Both The Pope and Caesar took ill in 1503. It was speculated that they accidentally drank poison meant for a guest. Alexander died and Caesar recovered. Unfortunately, with Alexander with almost all of the true Borgia power and connections. Money dwindled away. Without it, Caesar's “paid” standing Army left. He died in a local Civil War (of his starting) in 1507. Although the “female line” continued to spin their particular brand of intrigue in France, the real power of The Borgia Family died with Caesar. By the mid-18th Century, The Borgia's had completely disappeared. 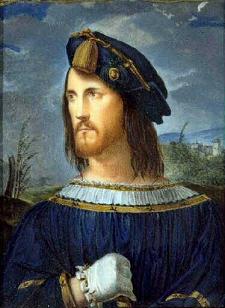